My Government’s ‘Punjab Model’ Envisages Education And Employment For All : Charanjit Singh Channi 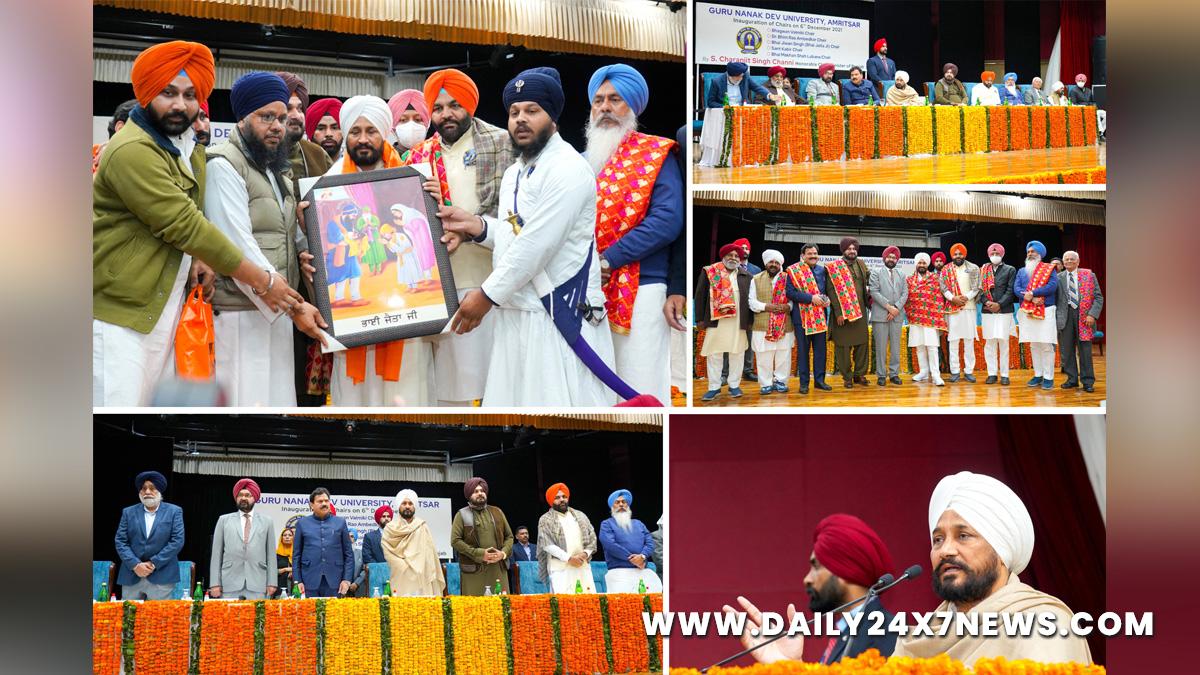 Amritsar : Punjab Chief Minister Charanjit Singh Channi on Monday said that the ‘Punjab Model’ of his government is based on ensuring quality education and employment opportunities for all.The Chief Minister, while addressing the gathering here at Guru Nanak Dev University campus after dedicating five chairs in the name of Bhagwan Valmiki ji, Bhai Jaita Ji (Baba Jiwan Singh), Bhagat Kabir Ji, eminent statesman and architect of Indian Constitution Dr. BR Ambdekar and devout Sikh Bhai Makhan Shah Lubaana, described education as key to good standard of living. He said that until and unless quality education is not imparted to the youth the amelioration of poverty is impossible. CM Channi said that the need of hour is to ensure quality and affordable education to all instead of freebies.The Chief Minister further said that Punjab is a welfare state and it is responsibility of government to ensure equal access of all to quality education and health. He said that the need of hour is to ensure that poor and meritorious students from all strata of society get a chance to excel in life. CM Channi said that his government is committed for this objective for providing succour to the common man.

The Chief Minister also announced to set up Sangeet Academy at university campus.In his address President of Punjab Congress Navjot Singh Sidhu hailed the Chief Minister for setting up these chairs. He expressed hope that these Chairs will inspire the future generations to stay connected with their glorious and rich heritage. Sidhu said that these chairs are not merely on name but they are institutions in their own.PPCC President also lauded the party high command as it has given the first Scheduled Caste CM to state since independence. He said that this is a revolutionary step which is in line with the Constitution drafted by Baba Sahib Dr BR Ambedkar to achieve the goal of socialism in the real sense. Sidhu said that Punjab will script a new success story if equal opportunities are provided to all.In his address Cabinet Minister Dr Rajkumar Verka said that Punjab government under the leadership of CM Channi is committed to serve the poor zealously. He said that electricity and water bills of poor have been waived off by CM Channi which in turn is a major relief to the poor people.On the occasion, Dr. HK Puri delivered his key note address on life and achievements of Dr. BR Ambedkar. Dr. Amarjit Singh highlighted the life and contribution of Bhai Jaita Ji and Sant Kabir Ji. Dr. Sarabjinder Singh presented historical facts about the life and philosophy of Bhai Makhan Shah Lubana and Dr. Sudha Jatinder threw light on life and teachings of Bhagwan Valmiki Ji.Present on the occasion included PPCC President Navjot Singh Sidhu, MPs Gurjit Aujla and Mohammed Sadiq, Deputy Speaker Punjab assembly Ajaib Singh Bhatti, MLAs Harminder Singh Gill, Inderbir Bolaria, Fatehjung Singh Bajwa, Gurpartap Singh Ajnala, Balwinder Singh Laadi, Tarsem Singh DC besides Vice Chancellor Dr. Jaspal Singh and others.

Omicron cases in UK rise by 50% in one day