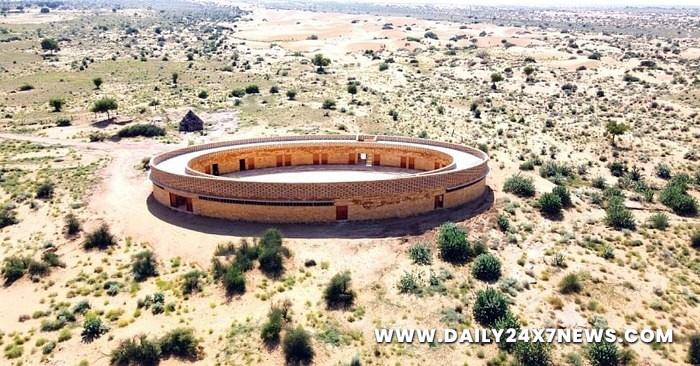 Jaipur : Situated in the centre of the Thar Desert in Rajasthan, a school building made of yellow sandstone is telling the story of sustainability for its architectural marvel as the students can study and play in the protected courtyard here without worrying about the extreme weather outside. This, at a time when temperatures keep soaring and the harsh winds cause sand to blow throughout the day.The school is built as an oval-shaped structure and blends with the desert landscape with no air conditioners installed inside the building but the beautiful Jali wall at the roofs and solar installations ensure that sustainable principles are followed at length.Named the Rajkumari Ratnavati Girls’ School, the building is designed by Diana Kellogg Architects and is funded by CITTA, an international non-profit founded by Michael Daube, aiming at enticing the local communities to send their girls to school. It will also encourage craftspeople to impart skills such as weaving and printing to the students’ mothers and aunts, and make it a marketplace to exhibit and sell their goods.The school building is situated just a six-minute drive away from Jaisalmer’s famous Sam Sand Dunes in Kanoi village and has been constructed with the idea of blending tourism, culture, craftsmanship and other unique aspects of Jaisalmer to open up a concept of economic avenue.Although the school planned to start its operations in March 2021, it could not start operating due to COVID. However, the design theme of the school has already starting making waves due to the beautiful structure which is quite impressive visually.”
The Rajkumari Ratnavati School will be offered to girls below the poverty line residing in the Thar Desert region of Jaisalmer. The facilities will include classrooms, a library, a computer centre, and a bus facility to transport girls from neighbouring villages. The school will provide education for an estimated 400+ girls from kindergarten through class 10. It will have a midday-meal programme to ensure proper nutrition for the students as well as lessen families’ financial burden,” says the CITTA website.CITTA’s second goal is to enhance gender parity in the region through the Women’s Cooperative. While girls receive education at the girls school, local artisans will teach mothers and other women weaving and embroidery techniques from the Jaisalmer region that are on the verge of being forgotten. The traditional techniques paired with contemporary designers will produce international quality items for the global marketplace, thereby diversifying and enhancing the local economy, it adds.The school building has a Central Hall which will act as the Girls School and the Women’s Cooperative, enhancing both programmes forming the completed GYAAN Centre. Strongly following the principles of women empowerment, the GYAAN Centre will invite renowned female artists, designers education advocates to create artwork, host events and present installations.According to the CITTA portal, “The space will also periodically act as a marketplace to share the women’s creations with tourists venturing to the nearby dunes to experience the sunset.”According to Michael, “The school will help bring together culture, growth opportunities for women, and tourism, all of which will create a “ripple in the desert.”The school has been constructed on land donated by Manvendra Singh Shekhawat, owner of the Suryagarh Palace hotel and a director for CITTA Foundation India. Indian fashion designer Sabyasachi Mukherjee also collaborated with CITTA to create uniforms for the students of this school and also released images showcasing the blue-maroon Ajrakh uniforms.

Vaccinate all above 45 years within this month, CS asks Health department

Chitkara University becomes India’s first university to get the coveted…

How a holy river degenerated into sewage canal