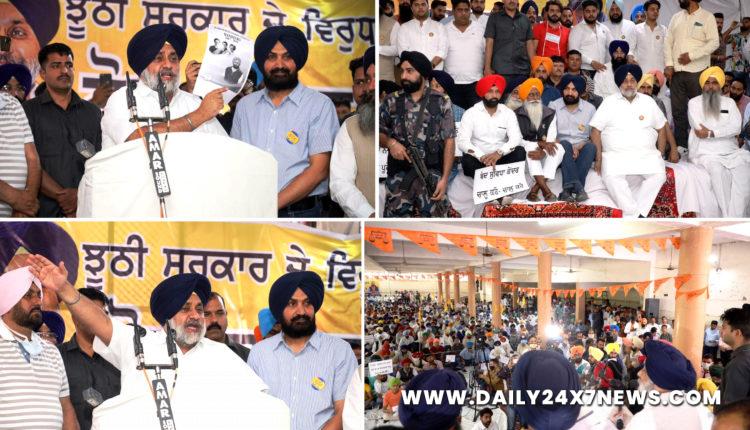 Kharar : Shiromani Akali Dal (SAD) President Sukhbir Singh Badal today asked chief minister Capt Amarinder Singh to disclose one landmark achievement of his four year tenure, saying people were fed up of the Congress party and his government and now wanted him to tell why he had betrayed them.Addressing the Punjab Mangda Hisab ‘dharnas’ which were held across all constituencies here, the SAD President instead of doing anything for the welfare of the people, Congressmen had presided over the loot of State resources be it by illegal quarrying of sand, liquor smuggling or embezzlement of NREGA funds. “Once the SAD forms the government in the State we will hold an inquiry into all these illegal acts, particularly the loot of NREGA funds”. He said Congress legislators had established cement tile factories and had forced village sarpanch to purchase tiles from them at inflated rates. “We will ensure all those guilty of such frauds are given their due punishment”, he added.Mr Sukhbir Badal also came down heavily on the Congress government for crying crocodile tears on the high rates of petroleum products. He said if the centre was levying a tax of 31 per cent on petro products, the Punjab government was levying a tax of 27 per cent. “The Congress government should reduce its VAT quotient to give relief to farmers and the common man”. He also pointed out that the State government had increased power tariff by about fifteen times during the last four years making power rates among the highest in the country. “These should be reduced immediately”. He also debunked the Congress propaganda that the power purchase agreements with private thermal plants were responsible for the high power tariffs saying the government was getting power at Rs 2.80 per unit but selling it at Rs 10 per unit. He announced that once the SAD formed a government in the State it would halve power tariff for domestic consumers.
Stating that the people would not let chief minister Capt Amarinder Singh run away now, Mr Badal said the CM would have to tell people why he played with their emotions and took a false oath in the name of the holy Gutka Sahib and the Dasam Pitah to waive off farmer loans completely besides other promises. “Even farmer suicide victim families were promised Rs 10 lakh and a government job but the government had reneged on this promise also”.Mr Badal said the Congress government was also responsible for the plight of farmers who were agitating against the three hated Agricultural laws. He said it was the Congress party which promised in its election manifesto in 2019 to repeal the APMC Act and allow inter-state trade in agricultural commodities. He said earlier the Congress government also amended the APMC Act in line with the provisions of the three Agricultural Acts.Promising to restart development in the State and secure its farmers, the SAD President said “once we form the government we will launch a programme to ensure all 12,000 villages in the State have concrete streets, access to clean drinking water and sewerage system. We will also introduce minimum support price on fruits and vegetables as well as milk”.Mr Badal also spoke on the legacy of chief minister Parkash Singh Badal saying the latter was responsible for initiating agricultural mandis in the State which had made food grain procurement possible. He said similarly the former CM was responsible for laying the foundation of the present day canal irrigation system, establishing the chain of tubewells in the Kandi area and doing away with user charges on supply of irrigation water to farmers.SAD leader Ranjit Singh Gill accompanied the SAD President at Kharar while Mr Didar Singh Bhatti accompanied him at Fatehgarh Sahib besides a large number of Akali workers.The SAD held rallies across all 117 constituencies in the State with senior party leaders presiding over them to demand answers from the Congress government for reneging on the promises made to the people.