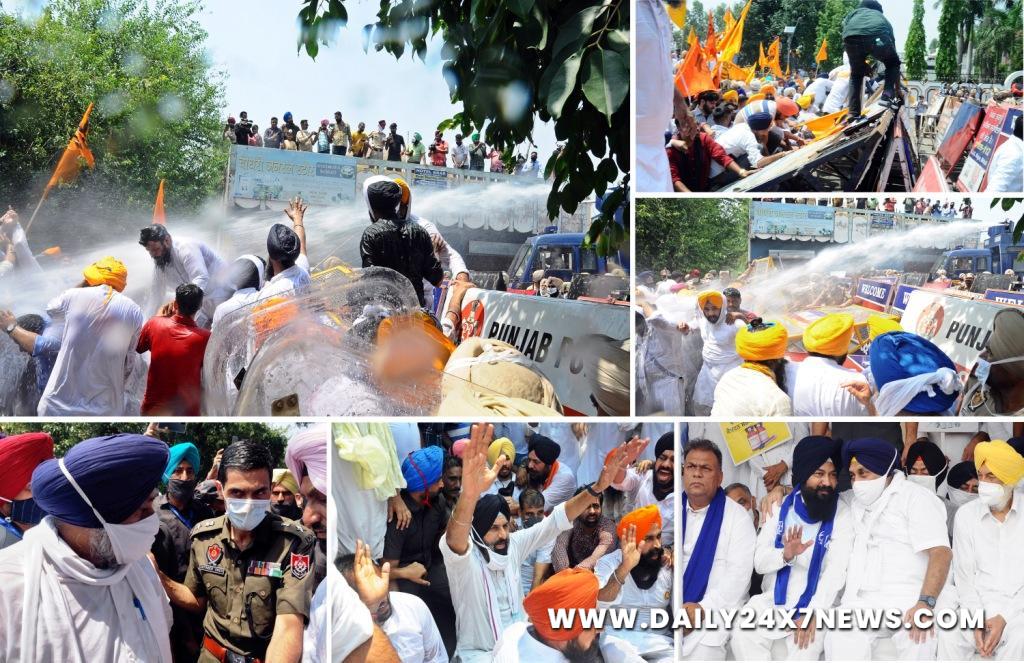 Chandigarh : Shiromani Akali Dal (SAD) – Bahujan Samaj Party (BSP) workers today broke police barricades and faced water cannons while marching to the farm house residence of chief minister Capt Amarinder Singh to demand the arrest of health minister Balbir Sidhu in the vaccine and Fateh kit scams. SAD President Sukhbir Singh Badal also courted arrest along with the SAD-BSP senior leadership.Thousands of SAD-BSP workers had earlier congregated near the chief minister’s residence and participated in the mini rally held to wake up the arrogant ‘raja’ who the alliance maintained had been missing from the State since the last four and a half years. The protest rally was also addressed by Punjab BSP President Jasbir Singh Garhi and also demanded that farmers be paid market rate for agricultural land acquired for highway projects.Speaking at the ‘dharna’, the SAD President made it clear that all Congress ministers who had indulged in corruption would be taken to task and booked as per law once the SAD-BSP alliance was voted to power in 2022. Mr Sukhbir Badal also condemned the chief minister for shielding the corrupt ministers. He said while Balbir Sidhu was responsible for the drug deaddiction tablet scam, PPE kit scam, vaccine scam and Fateh Kit scams, Sadhu Singh Dharamsot was responsible for the Rs 303 crore SC scholarship scam and Sukhjinder Randhawa had committed the seed scam.Mr Badal said besides this the chief minister had also extended patronage to the sand and liquor mafia which had looted the State with the loss in excise revenue alone being Rs 6,500 crore besides illegal mining of sand worth hundreds of crores.Condemning the Congress government for keeping the poor away from education, Mr Badal said the forthcoming SAD-BSP government would offer free quality education of world class standard in government schools. He said besides this, SC students would be offered scholarships in engineering and medical colleges.
Asserting that the battle to put an end to the corrupt and scam ridden Congress government had started, the SAD President said the SAD-BSP alliance would give a new direction to politics in Punjab. He said both parties had similar ideals and were committed to the welfare of the poor and downtrodden as well as farmers and khet mazdoor. “The SAD is a party of principles. We had stuck to our alliance with BJP through thick and thin but when the saffron party started attacking the interests of farmers we had no option but to quit the alliance and the government. Now our alliance with the BSP is permanent”. Mr Badal also disclosed that BSP President Mayawati had a big role in sealing the alliance.Speaking on the occasion, Punjab BSP President Jasbir Singh Garhi said the SAD-BSP alliance would fulfill the dream of Babu Kanshi Ram and S Parkash Singh Badal and was the first step towards ridding the State of the Congress party. The BSP President came down heavily on Congress Ludhiana mp Ravneet Bittu for insulting the Dalit community of Punjab in a recent statement and said a formal complaint had already been filed against the mp. He also spoke about the plight of two lakh SC students of the State who had been denied their roll numbers by private colleges, stating the Congress government was a mute spectator to the discrimination being meted out to Dalit students. Mr Garhi also highlighted how no attempt was being made to talk to ‘safai karamcharis’ who were on strike since more than a month across the State. He demanded the grievances of the safai workers be addressed immediately.Others who spoke on the occasion included – Balwinder Singh Bhundur, Janmeja Singh Sekhon, Mahesh Inder Singh Grewal,Gulzar Singh Ranike, Sharanjit Singh Dhillon, Bikram Singh Majithia,Gobind Singh Longowal, Dr Daljit Singh Cheema, Hira Singh Gabria,Jagmit Singh Brar, Pawan Tinu, Manpreet Ayali, Baldev Khaira, Dr Sukhwinder Sukhi, Rosy Barkandi, Parambans Singh Romana, Ranjit Gill and Charanjit Brar.