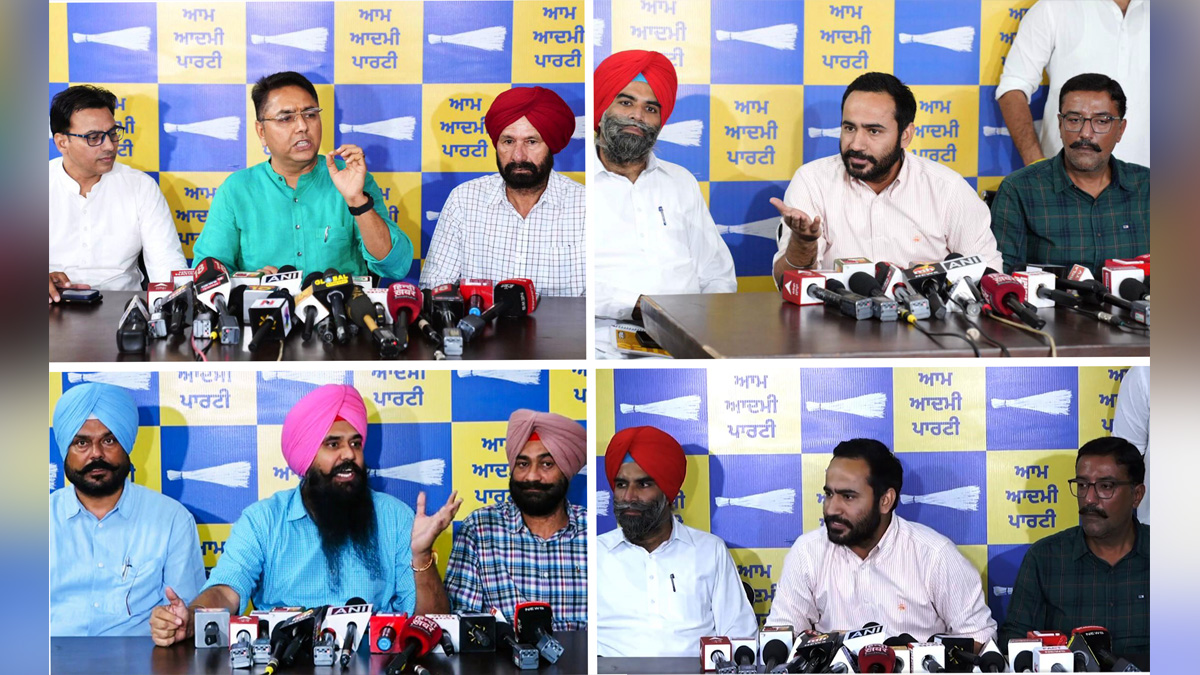 Chandigarh : A battery of leaders from the Aam Aadmi Party (AAP) trained guns on the BJP on Wednesday for trying to poach its MLAs and attempting to bring down the AAP government in Punjab.

They said, in one voice that the BJP will never be able to succeed with its vile agenda in Punjab.Addressing a press conference, at the party headquarters here, Cabinet Minister Aman Arora said that under ‘Operation Lotus’ many leaders and agents of BJP from Delhi and Punjab have approached 10 AAP MLAs and offered Rs 25 crore to each to quit AAP and join the BJP but their agenda will be foiled by the loyal workers of Arvind Kejriwal and Bhagwant Mann.

“AAP is not a political party but it is a family. We, under the leadership of Arvind Kejriwal are working dedicatedly to bring change in the country by reforming the political system.

Our MLAs are not going to be afraid of these bogus threats of BJP,” Arora said.He expressed confidence that despite the lure of Rs 25 to 50 crores, Operation Lotus will fail in PUnjab.

Punjab Sports Minister Gurmeet Singh Meet Hayer in a separate press conference said that by indulging in the politics of horse-trading, the BJP is destroying the Constitution of the country and insulting the legacy of Babasaheb Bhimrao Ambedkar.

He gave the examples of the current Chief Minister of Assam, Hemant Vishwa Sarma, Leader of Opposition in the Bengal Legislative Assembly Suvendu Adhikari, former Maharashtra Chief Minister and Sharad Pawar’s nephew Ajit Pawar, who were inducted into the BJP by threatening them with raids of the Enforcement Directorate.

Dozens of cases were going on against Ajit Pawar, but after joining BJP, all the cases ended within 3 days. Similarly, in Andhra Pradesh too, two MPs of Telugu Desam Party were brought into the party by showing the fear of ED and CBI.

And today, we have the example of Goa in front of you, where 8 out of 11 Congress MLAs, have broken away and joined the BJP, said Meet Hayer.

Addressing another press conference Party’s chief spokesperson Malvinder Singh Kang said that the BJP and Congress are both are unnerved with the rising popularity of AAP supremo Arvind Kejrwal and wanted to stop him by hook and crook.

He also attacked the Congress party and said that Congress MLAs all over the country are continuously joining the BJP by selling their moral values. “The Congress is a dead party and Rahul Gandhi is a failed leader.

They cannot compete with BJP and Narendra Modi, therefore, BJP is now focused on stopping Kejriwal and the AAP in the country”, he said.“BJP may have achieved its agenda of toppling government in many states of the country but AAP has prevented their ‘Operation Lotus’ in Delhi and Punjab as well.

We are true soldiers of Arvind Kejriwal and Bhagwant Mann. We are safeguarding democracy. We are not going to sell, nor are we going to be afraid of the BJP. AAP leaders are loyal and working for the welfare of public only,” Kang said.

Maulana Masood Azhar not in Afghanistan, but in Pakistan : Taliban

To overcome ‘isolation’ amongst elderly, ‘Pind di Satth’ concept to be replicated in…