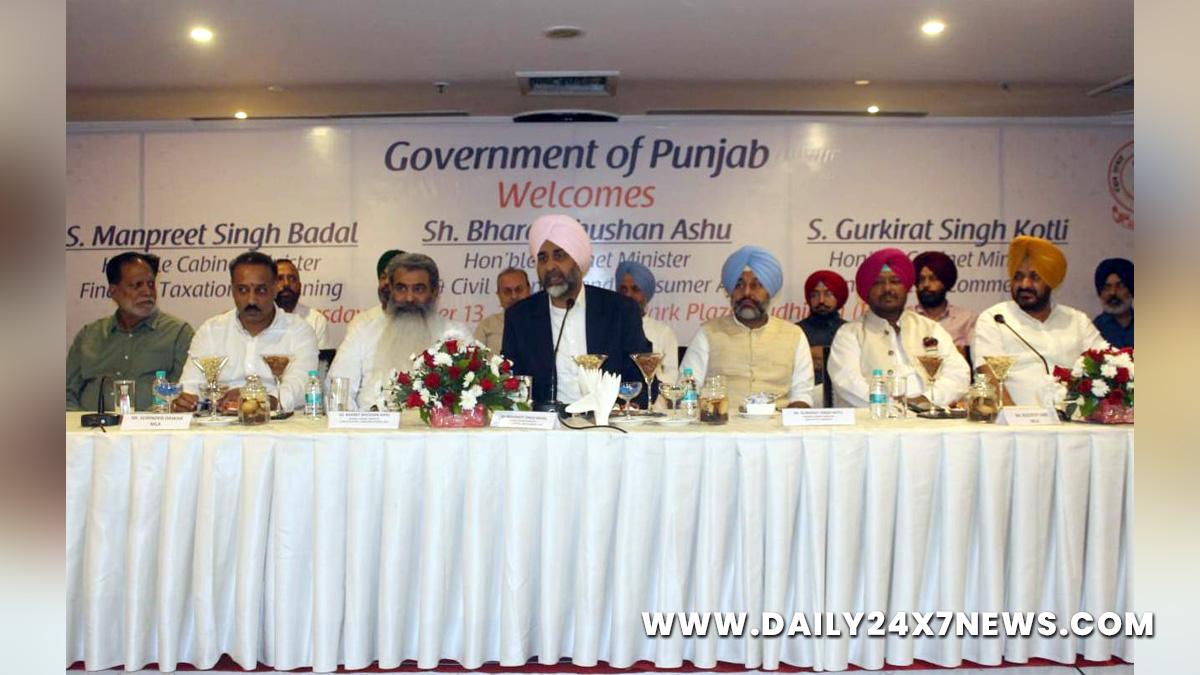 Ludhiana : In a major reprieve to the business community, Finance and Taxation Planning Minister Manpreet Singh Badal on Wednesday announced that the state government would unveil a new scheme to settle all VAT related assessment cases pending for the last few years besides would bring a faceless system for taxpayers before Diwali this year.Speaking to industry leaders of various associations of the Ludhiana in a local hotel, Manpreet Singh Badal accompanied by Food, Civil and Supplies Minister Bharat Bhushan Ashu and Industries and Commerce Minister Gurkirat Singh Kotli said that the scheme would be effectively rolled out to settle all pending assessments cases to benefit around 50000 assesses.The Minister said that Punjab Government is committed to making tax collections faceless without human intervention. Badal said that a faceless system would also be rolled out to assess the taxes to ensure Industrialists do not face any kind of harassment in the government offices. He said that there would not be an interface between the industrialists and department’s officials and would eliminate the harassment complaints of the industrialists from mobile wings.He said that both these major initiatives would be dedicated to the people before Diwali as his departments are already working tirelessly in this direction.

Manpreet Singh Badal said he would be touring all major industrial towns in the next 10 days and all issues of the industrialists regarding VAT, GST, and Electricity, infrastructural development, enhancements, mix land use cases and others would be resolved at the earliest.The Cabinet Minister also said that the state government has taken the issue of coal shortage with the union government and hoped the situation would be normal in next few days with coal rakes have been started arriving in the power plants.Food, Civil Supplies and Consumer Affairs Minister Bharat Bhushan Ashu said that Municipal Corporation Ludhiana would spend Rs 15 crore and Improvement Trust would give Rs 10 crore for the infrastructure development in the industrial areas/focal points.Industries and Commerce Minister Gurkirat Singh Kotli announced to set up a new Focal Point in Khanna soon and said roadmap is already being prepared in this regard. Terming the industry backbone of Punjab, Kotli said that a grant of Rs 20 crore would be issued for the infrastructure development of existing Focal Point in Ludhiana.Ludhiana East MLA Sanjay Talwar said that a dedicated officer would be appointed in MC Zone B and C offices exclusively for resolving civic issues of the industrialists promptly within a week.Prominent among those present on the occasion included Gill MLAs Rakesh Pandey and Kuldeep Singh Vaid, Mayor Balkar Singh Sandhu, LIT Chairman Raman Balasubramanian, Senior Deputy Mayor Sham Sunder Malhotra, Kamaljit Singh Karwal, Bhupinder Singh Basant, Neelkanth Avadh, Pankaj Sharma, Upkar Singh Ahuja, Darshan dawar, besides several others.