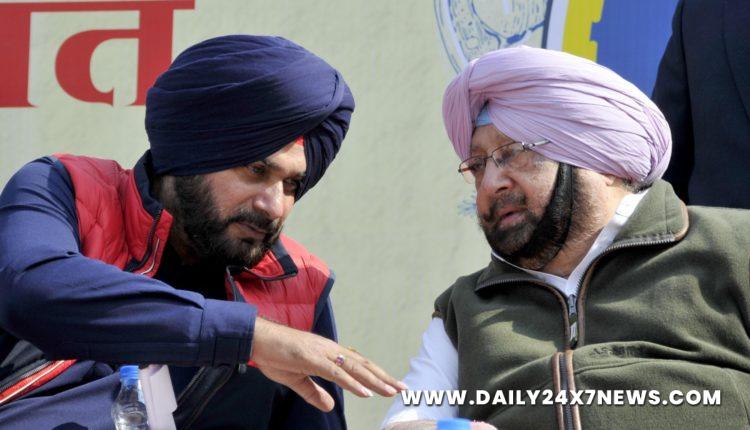 Chandigarh : With the Congress high command taking cognizance of the purported ‘anger’ of some of its senior leaders against the party-led Punjab governments stand on the 2015 sacrilege case, its ‘vocal’ legislator Navjot Singh Sidhu on Saturday dared Chief Minister Amarinder Singh to prove that the cricketer-turned-politician had met the leader of any other party to switch loyalty.”Prove one meeting that I have had with another party’s leader,” Sidhu dared the Chief Minister on Twitter.”I have never asked anyone for any post till date. All I seek is Punjab’s prosperity!! Was invited & offered Cabinet berths many times but I did not accept. Now, Our Esteemed High Command has intervened, Will wait…,” he added.The former Cabinet minister was replying to the recent assertion of the Chief Minister that Sidhu is in talks with the Aam Aadmi Party (AAP) and would quit the Congress.Two days back, Sidhu had tweeted: “In 2019, I began & ended my Election Campaign in Punjab seeking – Justice for Sacrilege of Guru Granth Sahib Ji & punishing the culprits & the ONE shielding them…Now, Our MLAs & Party Workers must go to Delhi & speak the Truth of Punjab to our High Command, as I regularly do!”It is learnt that interim Congress President Sonia Gandhi and Rahul Gandhi have taken feedback on the situation. Rahul Gandhi is expected meet all the legislators and MPs from Punjab to end the impasse ahead of the Assembly polls in the state slated in early 2022.
In a bitter war of words last week, Sidhu had advised the Chief Minister to stop firing from his “colleagues’ shoulders”.A defiant Sidhu had reminded Amarinder Singh that “his soul demands justice for Guru Sahib”.His reaction came after seven ministers had demanded the suspension of Sidhu from the party for indiscipline and launching verbal attacks on Amarinder Singh.The ministers urged the party high command to take action against Sidhu for his open rebellion against the state party leadership.The Chief Minister has already challenged Sidhu to clearly spell out whether he is a member of the Congress.”If yes, then his continuing rant against his Chief Minister and the government amounts to gross indiscipline,” Amarinder Singh had said, adding that the Congress dissident ought to choose the side he is on because “he is indulging in breaking the discipline of the party, and the BJP won’t take him back and as far as the SAD is concerned, it is also peeved with him”.”Is sacrilege case not the top priority for the Home Minister,” Sidhu had asked the Chief Minister.Two persons were killed and many others were injured after the police under the previous SAD-BJP government resorted to unprovoked firing on hundreds of people protesting against the alleged desecration of the Guru Granth Sahib in Bargari village in Faridkot district in 2015.