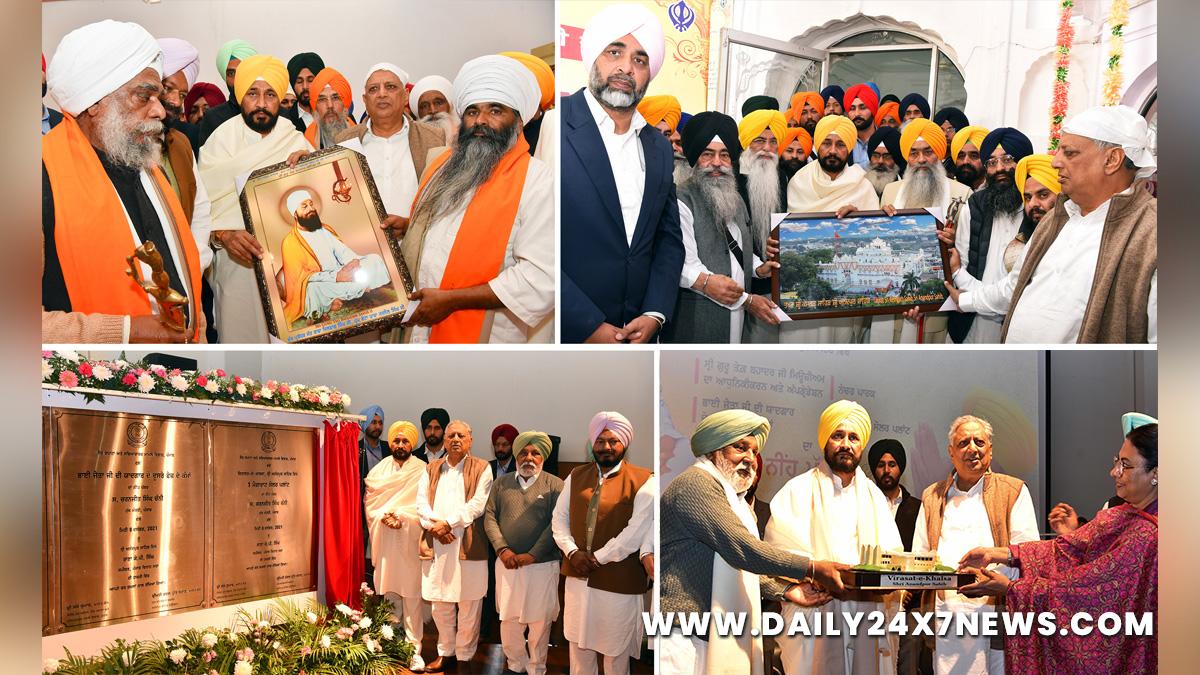 Sri Anandpur Sahib : Punjab Chief Minister Charanjit Singh Channi on Wednesday laid the foundation stones of development projects worth Rs. 20 crore dedicated to mark the 346th martyrdom day of the Ninth Sikh Guru Sri Guru Tegh Bahadur Ji.Addressing a public gathering here at an auditorium in Virasat-e-Khalsa after paying obeisance to the Hind-di-Chadar Sri Guru Tegh Bahadur Ji at Gurdwara Sri Sis Ganj Sahib, CM Channi said Guruji’s legacy of religious tolerance, secularism and freedom of faith would ever guide the humanity till eternity to live in peace and harmony in an egalitarian society. He said today is a day of introspection to follow the teachings of Guru Tegh Bahadur Ji to propagate the message of universal love, amity and brotherhood in every nook and corner of the world. CM Channi further said that the architect of Indian Constitution Dr. BR Ambedkar, the first Prime Minister Pandit Jawaharlal Nehru besides the members of Constituent Assembly strived hard to lay the foundation of Constitution on the principles of secularism after having drawn inspiration from the unprecedented and supreme sacrifice of Sri Guru Tegh Bahadur Ji, who had laid down his life to enable the people of other religions especially the Hindus to profess their own religion without any subjugation and coercion. Notably, the Hindus were subjected to repression by the then Mughal regime for conversion of their religion to Islam. Guruji’s unique sacrifice for the protection of Hinduism in the annals of history would be ever remembered by one and all.

Paying glowing tributes to Baba Jeevan Singh Ji (Bhai Jaita Ji)- a true companion of the Tenth Sikh Guru Sri Guru Gobind Singh Ji, CM Channi said that Bhai Jaita Ji’s enormous contribution as a devout Sikh could never be forgotten. Bhai Jaita Ji being the most beloved Sikh of Sri Guru Gobind Singh Ji, who brought the Sis (severed head) of Sri Guru Tegh Bahadur Ji from Chandni Chowk, Delhi to Sri Anandpur Sahib facing all odds due to tyranny unleashed by the then Mughal Empire. Later, Bhai Jeevan Singh Ji also sacrificed his life while fighting against the Mughals. Eulogizing Bhai Jaita Ji’s spirit of self sacrifice and devotion, CM Channi declared a gazetted holiday every year on the ‘Janam Divas’ of the legendary Sikh martyr.On the occasion, CM Channi digitally laid the foundation stones of four projects including the modernization and upgradation of Sri Guru Tegh Bahadur Museum with a cost of Rs. 1.5 crore, nature park to be developed and named after Sri Guru Tegh Bahadur ji over an area of 62 acres at a cost of Rs. 10 crore with the plantation of those trees which finds mention in the Bani of Sri Guru Granth Sahib ji, 1 MW Solar project at a cost of Rs. 4.16 crore and second phase of Bhai Jaita Ji Memorial at a cost of Rs. 2.63 crore.Acceding to the request of Speaker Punjab Vidhan Sabha Rana KP Singh, who also represents Sri Anandpur Sahib Assembly Constituency, CM Channi announced Rs. 5 crore for a community centre to facilitate the local residents for organizing social functions and a fire brigade station within the local Municipal Council.

Realising the significance of community centres, CM Channi also announced that such centres would also be opened in each and every block across the state so as to enable the people to organize social gatherings.Fulfilling the long pending demand of the people with a view to propel socio-economic development in the region, CM Channi also assured the Speaker that he had already asked the Finance Minister to immediately accord financial and administrative sanction for construction of the bridge over river Swan to connect Nangal-Sri Anandpur Sahib region with Doaba which would curtail the distance between the two regions thus saving their time, money and energy. He also asked the Speaker to fix a date for its foundation stone to be laid next week.Earlier speaking on the occasion, Speaker Vidhan Sabha Rana KP Singh said that it’s a matter of great pride and satisfaction that CM Channi is the only Chief Minister from Congress party who had ever visited on this sacred day to pay respects to Sri Guru Tegh Bahadur Sahib. He said that none finds any parallel in the history of world where someone except Sri Guru Tegh Bahadur ji had gone on his own to lay down his life that too for the sake of another religion.In his address, Deputy Speaker Punjab Vidhan Sabha Ajaib Singh Bhatti also exhorted the people to follow the ideology of ninth Sikh Guru Sri Guru Tegh Bahadur ji for which he preached the message of love and brotherhood to the humanity.Earlier, the Chief Minister accompanied by Finance Minister Manpreet Singh Badal also paid obeisance at the bhog of Sri Akhand Path Sahib during a function organized by the Tourism & Cultural Affairs department, where he also honoured the various personalities from Sant Samaj with Siropa (robe of honour). CM Channi also visited the (tap asthan) of Bhai Jaita Ji to offer his prayers.