Charanjit Singh Channi Announces To Enhance Compensation From Rs. 12,000 To Rs. 17,000 Per Acre To Cotton Growers Affected By Pest Attack 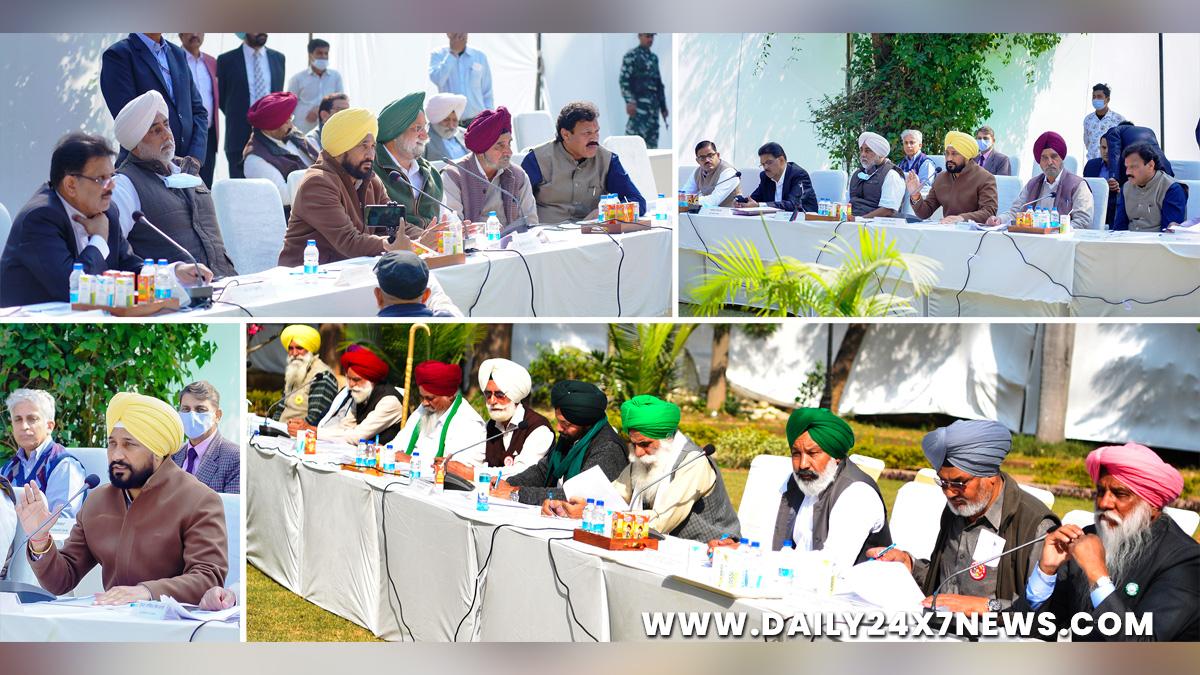 Chandigarh : In a major reprieve to the cotton growers and farm labourers who suffered huge loss due to pink bollworm pest attack on cotton crops, the Punjab Chief Minister Charanjit Singh Channi on Wednesday announced to enhance the compensation amount from Rs. 12,000 to Rs. 17,000 per acre besides 10% of the relief to the farm labourers involved in picking of cotton.Chairing a high level meeting with the representatives of 32 farm unions of Sanyukt Kisan Morcha (SKM) led by President BKU Balbir Singh Rajewal here at Punjab Bhawan, CM Channi said that the enhanced compensation amount would involve nearly Rs. 200 crore in addition to the already approved Rs. 416.18 crore on account of compensation @ Rs. 12,000 per acre.Acceding to another major demand of SKM, CM Channi also announced to cancel all the FIRs registered by the Punjab Police against the farmers who had been protesting against the black farm laws within the state, after following the prescribed procedure with due diligence. He also assured the representatives of SKM that he would personally take up the matter with Punjab Governor, who is also the Administrator of UT Chandigarh to withdraw the cases against the farmers who participated in the protest march towards Punjab Raj Bhawan against draconian farm laws. Conceding their demand, CM Channi announced to call on Punjab Governor soon accompanied by a delegation of various farm representatives urging him to withdraw these cases forthwith.

On the demand of farm unions, CM Channi said that all the cases of stubble burning registered against the farmers would sympathetically consider from the legal aspects to safeguard the interest of the farming community. However, he also appealed to farmers to refrain from stubble burning in future as it was hazardous both for environment as well as human health besides hampering the fertility of land to an enormous degree.Taking serious note of supplying paddy seed of spurious quality to farmers in Moga district which resulted in crop damage in 2000 acres, the Chief Minister directed the Agriculture Minister to take a stern action against the fraudulent seed company and ordered due compensation to the affected farmers to make their loss good. The Chief Minister also directed to initiate exemplary action against all the erring officials of PUNSEED involved in supply of substandard wheat seed during the current Rabi season.Regarding the meager compensation paid to the farmers in lieu of land acquired from them for Delhi-Katra-Amritsar expressway, CM Channi said that he would personally convene a meeting of all Divisional and Deputy Commissioners to rationalize the rates of compensation in this regard. He categorically said that such farmers should not be allowed to suffer on this count and thus directed the Financial Commissioner Revenue to examine such cases on priority to award fair compensation as per the provisions of the Right to Fair Compensation and Transparency in Land Acquisition, Rehabilitation and Resettlement Act, 2013.Taking a tough posture to check the adulteration of milk and milk products, CM Channi sought wholehearted cooperation and support from the farm organizations to stamp out this menace which was posing a major threat to the health of human beings and underscored the need to launch a massive awareness campaign to sensitize the people on this count.

Without mincing any words, the Chief Minister said that the state government would not tolerate any sort of laxity in this regard and directed the departments of Health, Dairy Development and Cooperation (Milkfed) to act sternly against these unscrupulous elements, which were playing havoc with the lives of people.In a bid to give priority to state’s youth in the government jobs, the Chief Minister said that the state government is seriously contemplating to bring a comprehensive proposal in the next Cabinet for formulation of a policy to reserve around 75% of posts in government exclusively for Punjabi youth.On the issue of appointment of PAU Vice Chancellor, the Chief Minister said that the selection process in this regard is already underway and the competent person would be appointed soon purely on the merit basis in a fair and transparent manner. Likewise, CM Channi also emphasized the need to infuse professionalism and scientific temper in the fields of agriculture and horticulture and thus asked the Chief Secretary to appoint technocrats with vast experience and expertise in their respective fields so as to take the agriculture sector on new heights of glory.Agreeing to another demand of SKM to fill vacancies in the Agriculture department, the Chief Minister apprised that 141 posts of Agriculture Development Officers have already been appointed and equal number of posts would be filled soon to provide efficient extension services to the farmers which would go a long way in supplementing their income.

Referring to the demand raised by the representatives of SKM to waive the outstanding loans of all categories of farmers including small, marginal and landless farmers, CM Channi said that he would have a separate meeting with them after detailed deliberations with Finance Department regarding state’s financial position.Pointing out further, CM Channi said that 5.63 lakh farmers have already been benefitted from loan waiver scheme to the tune of Rs. 4610.84 crore. Apart from these, a sum of Rs. 520 crore is being provided to the landless farmers and farm workers across the state.CM Channi further said that the state government has already given the highest State Agreed Price (SAP) of Rs. 360 per quintal to the sugarcane growers, however the SKM representatives demanded that Rs. 35 per quintal as financial assistance should not be provided to the farmers directly but it should be given to them through private sugar mills and these mills should pay full SAP directly into farmers accounts. Thereafter, CM Channi said that he would hold an exclusive meeting with owners of private sugar mills to sort out this issue to the satisfaction of cane growers.

Expressing solidarity with the bereaved families of farmers, who lost their breadwinners during the farmers’ agitation, the Chief Minister said that the state government has already provided government jobs to 152 victim families besides giving financial aid of Rs. 5 lakh to each family. He said the Revenue department in sync with concerned Deputy Commissioners is already in the process to finalize the remaining cases.Showing satisfaction over the smooth and hassle free procurement during paddy marketing season, CM Channi said that Rs. 33750 crore has been paid out of Rs. 35965 crore to the farmers, which accounts 98% of the total payment for procurement. He assured the SKM representatives that every single grain of farmers would be procured at any cost.The Chief Minister also announced free power to 500 connections under Agriculture Purpose (AP) metered category consumers, who were allotted connections under Tatkal scheme in 2017. These consumers would now get free power at par with agricultural consumers.On the issue of shortage of DAP during the ongoing Rabi season, CM Channi said that this problem has arisen due to hike in prices in international market. To avert this situation, CM Channi said the State government with its persistent efforts and coordination with GoI has considerably eased out the situation.Prominent amongst others who were present on the occasion included; Deputy Chief Minister Sukhjinder Singh Randhawa, Cabinet Ministers Tript Rajinder Singh Bajwa, Pargat Singh, Randeep Singh Nabha, Raj Kumar Verka, Gurkirat Singh Kotli besides Chief Secretary Anirudh Tewari, Principal Secretary to CM Hussan Lal, FCR VK Janjua, FCD DK Tewari and Principal Secretary Finance KAP Sinha.