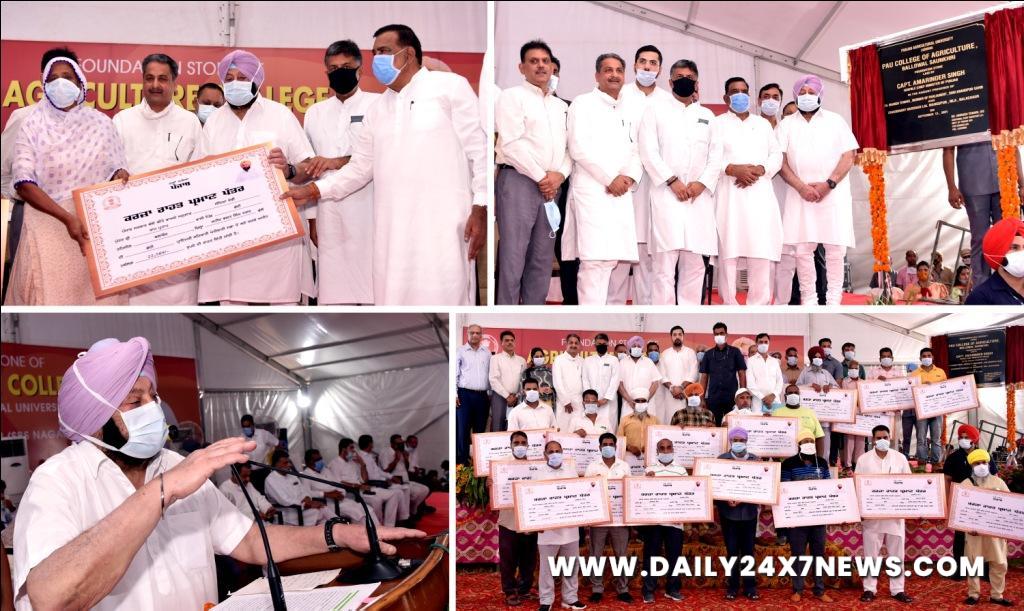 Ballowal Saunkhri (SBS Nagar) : Launching a fierce attack on the Shiromani Akali Dal (SAD) for double crossing the farmers over the issue of Black farm laws, the Punjab Chief Minister Captain Amarinder Singh on Monday said that the farm laws were drafted with the consent of SAD with Harsimrat Kaur Badal as the Union Minister and even the former CM Parkash Singh Badal arguing in favour of these laws but changing their tune completely when their move backfired.Calling Congress as the only party who protested against these black laws from the very first day, the Chief Minister said that his Government called All Party meeting and then held consultations with the farm unions. Afterwards, the Punjab Government convened a special session of the Punjab Vidhan Sabha and passed Bills aimed at countering these farm laws.Taking on the Union Government, the Chief Minister said that the constitution has been amended 127 times since 1950. “So why not one more time to repeal the farm laws for providing succour to the farmers who have been sitting at Singhu and Tikri borders,” said Captain Amarinder Singh adding that the Punjab Government has provided Rs. 5 lakh to every farmer from the State who died during the agitation against farm laws besides a job to the kin of the deceased farmers.The Chief Minister was addressing a gathering on the occasion of laying the foundation stone of PAU- College of Agriculture at Ballowal Saunkhri in SBS Nagar district and kickstarting the academic session with admissions already made to 60 seats and classes set to begin from October 1, 2021.Pointing out further, the Chief Minister said that it would be the first time that a college of Agriculture outside the Punjab Agricultural University, Ludhiana would come up with the BSc (Agriculture) course.

Speaking on the occasion, the Chief Minister said that the opening of this College will prove to be a milestone in the development of agriculture in the Kandi area and will be helpful in strengthening its research on the problems and crops of this region as well as agricultural services for region’s farmers.The college would boost the research on how to ensure more production with the judicious use of water resources as the lands are less and water is scarce in the region, added the Chief Minister.Announcing a horticultural research station in Nawanshahar, Captain Amarinder Singh emphasized Apple Research also as part of diversification. “The State Government would now pay 90 percent of the subsidy from earlier 60 percent paid to the small farmers for erecting barbed wire fencing in order to protect their crops from animals,” also announced the Chief Minister adding 5 Horticulture Estates have been set up to guide the farmers and provide them the services for raising the fruits and vegetables.As part of untiring efforts to improve the market infrastructure, market intelligence services and processing facilities, two Mega Food Parks have been set up as also an Agricultural Marketing Innovations, Research and Intelligence Centre to help in production and marketing planning keeping in view the national and international demand and prices.Coming to the other issues, the Chief Minister further said that during the past 4.5 years, the investor and business friendly policies of the State Government has lead to an investment of Rs. 91,000 crore with 20 lakh youth facilitated with the jobs.

The Chief Minister also handed over cheques under debt waiver scheme as a token gesture to 25 landless farmers and farm labourers out of the total 31066 beneficiaries in the district. These beneficiaries have got the benefit to the tune of Rs 64.61 crore.Lauding the Chief Minister in his address, the MP from Sri Anandpur Sahib Manish Tewari said that despite the Union Government withholding the RDF and GST compensation due to the State Government thus creating roadblocks in the progress of Punjab, Captain Amarinder Singh has very efficiently led the State Administration creditably even during the testing times of Covid-19 pandemic besides strengthening the security apparatus in the border areas in view of the threat from Pakistan in the form of weapons and drugs. He also advocated reconstruction and realignment of Kandi canal phase- 2 apart from exploring the possibility of wood park and coffee plantation.The PWD and Education Minister Vijay Inder Singla said that Captain Amarinder Singh is the messiah of the farmers who always carries their interests at heart which is evident from the fact that it was he who brought BT Cotton seeds to increase the income of the farmers.The MLA from Balachaur Chaudhary Darshan Lal Mangupur expressed gratitude to the Chief Minister for bestowing a gift to the region in the form of the College of Agriculture and leaving no stone unturned in ensuring adequate funds for the development of the Kandi region. He reiterated that the Congress would again form government in the state in 2022 under the leadership of Captain Amarinder Singh.The ACS (Development) Anirudh Tewari the Regional Research Station of Ballowal Saunkhri is doing pioneering research work in 35 varieties of various crops such as maize, wheat and oilseeds besides several types of fruits like Amla, Guava and Peach.Prominent among others who were present on the occasion included MLA Angad Singh, Chairman District Planning Board Satbir Singh, Registrar Cooperative Societies Vikas Garg and Director Regional Research Station, PAU Dr. Manmohanjit Singh.

Ayushmann Khurrana : I’m trying to tell people to not stereotype themselves