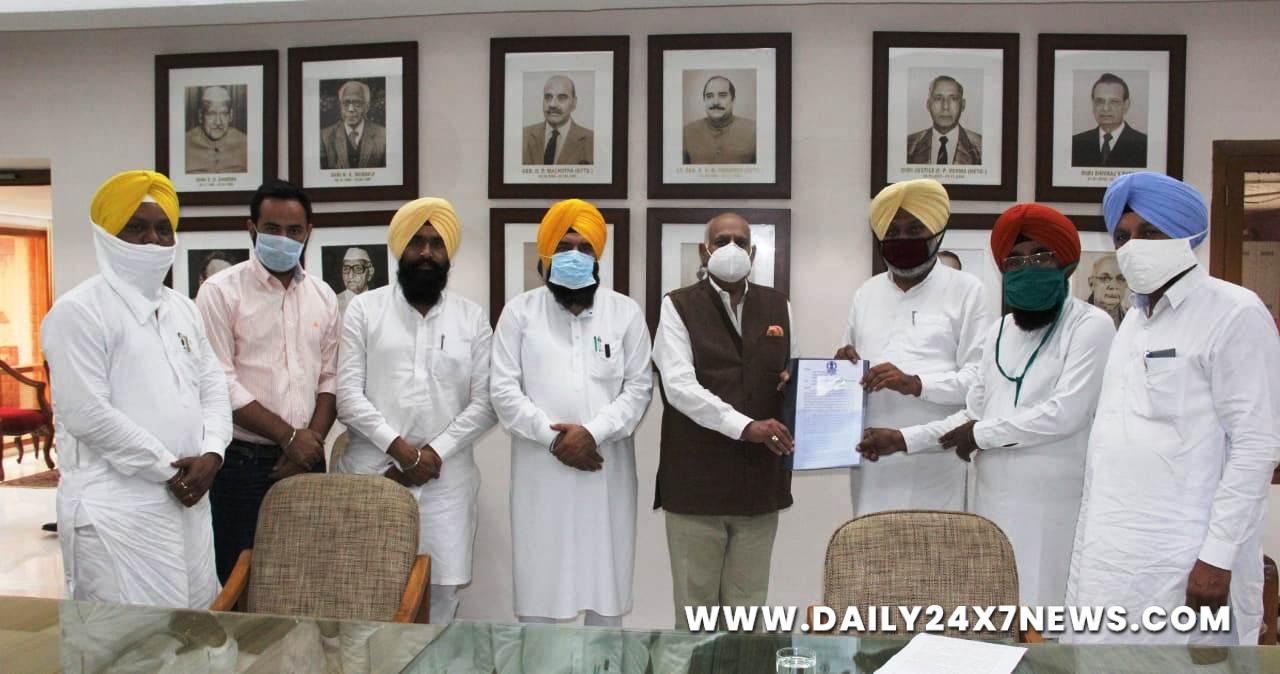 Chandigarh : Demanding immediate dismissal of the most corrupt and ill-famed ministers of the Congress government, a delegation of the Aam Aadmi Party (AAP) on Tuesday met the Governor of Punjab, Honorable V.P. Singh Badnore. Led by Leader of Opposition (LoP) Harpal Singh Cheema, the delegation included MLAs Principal Budh Ram, Gurmeet Singh Meet Hayer, Kulwant Singh Pandori, Manjit Singh Bilaspur, Jai Singh Rodi and Master Baldev Singh.In a memorandum submitted to the Governor, the AAP delegation accusing Cabinet Ministers Sadhu Singh Dharamsot, Rana Gurmeet Singh Sodhi, Balbir Singh Sidhu, Sunder Sham Arora and Bharat Bhushan Ashu of multi-crore scams; demanded their immediate dismissal from the cabinet, with registration of criminal cases against them. Talking to the media after meeting the Governor, LoP Harpal Singh Cheema said half a dozen ministers of the ruling Congress were not only embroiled in major corruption cases, but were also infamous among children. “Chief Minister Captain Amarinder Singh, Congress High Command and Punjab Congress president Navjot Singh Sidhu have not spoken out against them; it is a far cry to take action,” he added.Cheema said fulfilling the responsibility of the Opposition, the Aam Aadmi Party today requested the Honorable Governor to dismiss these corrupt ministers. He said the Cabinet Minister Sadhu Singh Dharamsot had embezzled crores in the funds of Post Matric Scholarship, due to which the future of more than two lakh Dalit students was in jeopardy.

“Although, the CBI is probing the scholarship scam, Captain Amarinder Singh has given the minister a clean chit from government officials,” he said. Regarding Rana Gurmeet Singh Sodhi, Harpal Singh Cheema said that Sodhi had received money twice in return for his acquired land and had tried to get the money for the third time; thus Rana Sodhi, who was holding a constitutional post, had robbed the exchequer. “There is a direct case of fraud against him,” he added.Accusing Punjab Health Minister Balbir Singh Sidhu of scam in procuring Fateh Kits, essential for corona treatment, Cheema said Minister Sidhu had occupied 10 acres of land near Mohali in the name of Gaushala; the value of which is more than Rs 100 crore. “While Bharat Bhushan Ashu is already embroiled in various controversies, now an official close to Minister Ashu has sold wheat worth Rs 20 crore in eight godowns of Jandiala Guru. This has caused huge losses to the exchequer of Punjab,” said Cheema.The LoP further said that where Minister Sunder Sham Arora had committed a scam in allotment of industrial plots; he had also sold the JCT Company’s 31 acres of land in Mohali at throwaway prices. The issue of sale of this land was raised in the Punjab Vidhan Sabha and an inquiry into the matter revealed that the sale of the land at throwaway prices had caused a loss of over Rs 125 crore to the exchequer, said Cheema.He said the Chief Minister, PPC president along with the Congress high command was protecting these corrupt ministers, as share of the loot goes to the top. “That is why no action is taken against them, even though their stories of corruption make headlines,” he added. On the Twitter war being waged by Navjot Sidhu, Cheema said if Sidhu really wanted the welfare of Punjab then these corrupt ministers should be removed from the Punjab Cabinet.