The Aam Aadmi Party (AAP) convoy is increasing day by day in Punjab with eminent personalities joining the party. The AAP gained a major boost in Majha region on Wednesday when Congress leader Sarvan Singh Dhun and several other Congress leaders joined the party along 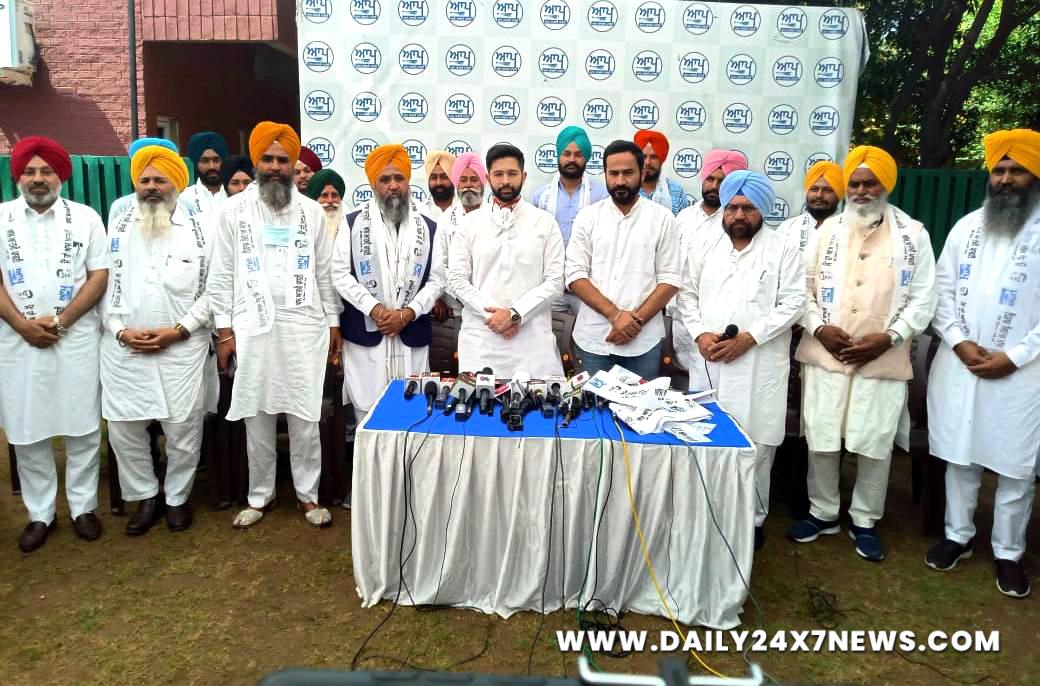 Chandigarh : The Aam Aadmi Party (AAP) convoy is increasing day by day in Punjab with eminent personalities joining the party. The AAP gained a major boost in Majha region on Wednesday when Congress leader Sarvan Singh Dhun and several other Congress leaders joined the party along with their associates. The leaders joined the party in presence of AAP Punjab affairs co-incharge Raghav Chadha, party’s state general secretary Harchand Singh Barsat and Youth Wing president and MLA Gurmeet Singh Meet Hayer. Welcoming the leaders who joined the party, Raghav Chadha said that influenced by the pro-people policies of the Aam Aadmi Party and the works of Delhi’s Arvind Kejriwal government, people are joining the party in large numbers.He said that the Kejriwal government has made Delhi’s government schools world-class and introduced a new model of development by improving the condition of government hospitals. “Today the people of Delhi are teaching their child in the government school after getting their names dropped from private schools and the people are getting good treatment in government hospitals free of cost. The result of that is today people across the country are liking the Aam Aadmi Party and Arvind Kejriwal,” said Chadha.Addressing the media, Chadha further said that the people of Punjab were also joining the party after being influenced by the work done by the Aam Aadmi Party in Delhi and see the AAP as the only credible alternative that can bring a change. Taking a dig at Chief Minister Captain Amarinder Singh, Chadha said that the people were leaving the Congress due to the anti-people policies of the Captain government. “Captain Amarinder Singh did not fulfil any of the promises made before the elections.

Captain is the most inefficient and lazy Chief Minister of the whole of India. He betrayed the people of Punjab by making false promises,” he added.Gurmeet Singh Meet Hayer said that before the elections, Captain Amarinder had promised ‘Ghar-Ghar Rozgar’ to the youth of Punjab, but after coming to power, reneged on his promise. “The Captain government abolished thousands of government posts in the name of reorganising the departments. The youth of Punjab will definitely take account of the false promises made by Captain Amarinder, in the 2022 elections,” he added. Sarvan Singh Dhun has been active in social and political work for a long time. He has been a member of the Zila Parishad from 2008 to 2013. In 2012, he contested the elections from People Party of Punjab from Khemkaran assembly constituency and got around 9,000 votes. He is currently an executive committee member of the Punjab Pradesh Congress Committee, but disappointed by the anti-people policies of the Captain government and impressed by the work of Arvind Kejriwal government in Delhi, he decided to join the Aam Aadmi Party. On the occasion, Dhun said that today every Punjabi was disappointed with the false promise of Captain Amarinder Singh and the grassroots leaders were forced to leave the party.Dhun’s associates Amrik Singh Asal, Bhagwant Singh Kamboke, Jaswinder Singh Chung, Karaj Singh Daliri, Sarpanch Mehar Singh, Baljeet Singh Algo, Gulshan Algo, Jugraj Singh, Gurkaram Singh, Saab Singh, Baj Singh, Sukhwant Singh, Saravanan Singh, Sukhchain Singh, Gursahib Singh, Dilbag Singh, Gurvinder Singh, Harpal Singh Chathu, Lakhwinder Singh, Lucky Aulakh, Chanan Singh, Gurvel Singh, Harvinder Singh, Heera Singh Bhullar, Resham Singh, Hoshiar Singh, Rasal Singh, Ranjit Singh, Jarmanjeet Gill and Gursab Singh Dal also joined the AAP. The leaders who joined the AAP said that they will diligently fulfil the responsibilities entrusted to them and work day and night to strengthen the party.

Inclusiveness and participation of especially abled children in mainstream is…