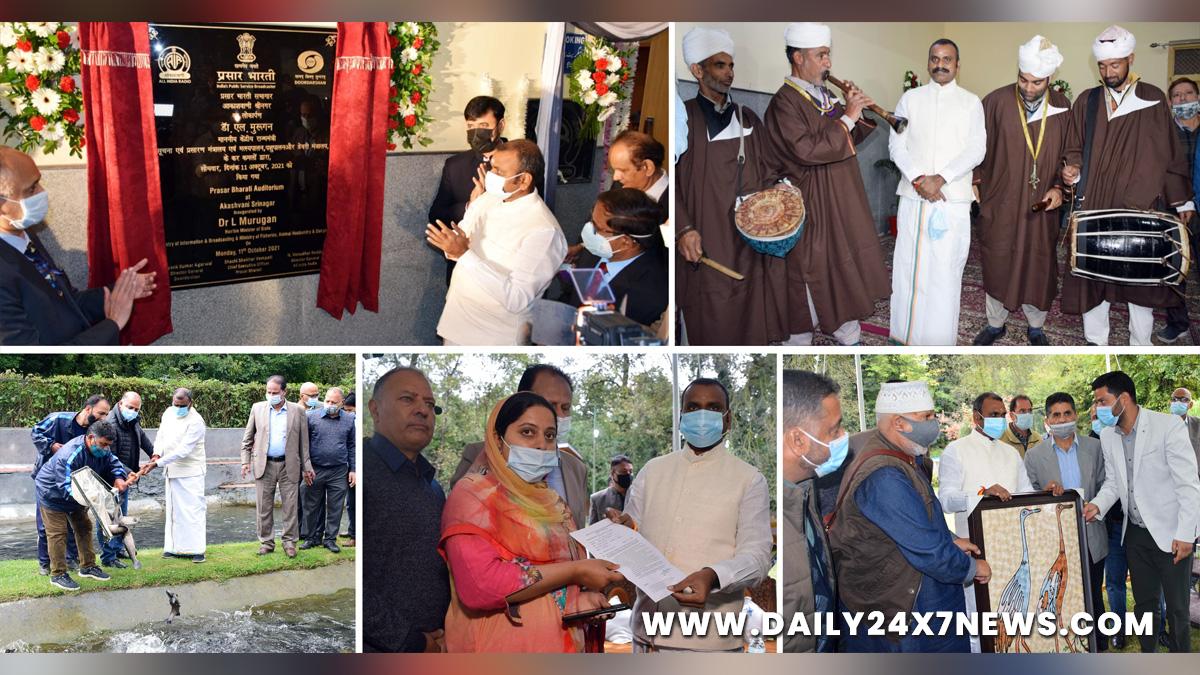 Srinagar : Union Minister of State for Information and Broadcasting and Fisheries, Animal Husbandry and Dairying Dr. L. Murugan today said that Prime Minister Narendra Modi’s idea of inclusive growth and good governance and the approach adopted by the Jammu and Kashmir administration has put the UT on the path of massive development. Dr. Murugan was speaking on the occasion of his visit to All India Radio Srinagar where he inaugurated the renovated Prasar Bharati Auditorium. The auditorium was damaged in devastating floods in the year 2014.In his address, Dr. Murugan praised the role played by All India Radio Srinagar and Doordarshan Kendra Srinagar. He said that both these institutions have been making quality programmes in several languages for the past many decades. He made a special mention of the role played by both AIR Srinagar and DDK Srinagar during the devastating 2014 floods and during the Covid-19 pandemic.Dr. Murugan said that being stationed in a border area, All India Radio and DDK Srinagar are playing a vital role in countering the propaganda and obnoxious narrative unleashed by the adverse neighbouring countries.

A cultural programme was also presented on the occasion. Earlier, Additional Director General, AIR and Doordarshan, North Zone, M S Ansari, delivered the welcome address and DDG Projects AIR, Aditya Chaturvedi, presented the vote of thanks.Later, the Minister visited the Trout Culture Farm Laribal Dachigam. The Minister inspected the rearing units, machinery and other facilities available at the farm and interacted with the fish farmers. He handed-over Pradhan Mantri Matysa Sampada Yojana (PMMSY) trout unit allotments to the beneficiaries.During his interaction with the farmers, the Minister said that the government of India is committed to double the famers’ income and has taken several initiatives under the leadership of the Prime Minister.He appealed to young people to come forward and become a part of nation building. He said that trout farming has emerged as an important source of income and the people should take every possible benefit from it.The Minister was apprised that the fisheries department has established hatcheries in all the districts and is supplying fingerling fish to the farmers. The Minister was also informed that sale centres have been established at various locations to increase the market availability of the trout.