How the ‘Wild Frank’ of Indian television Arnab Goswami was tamed 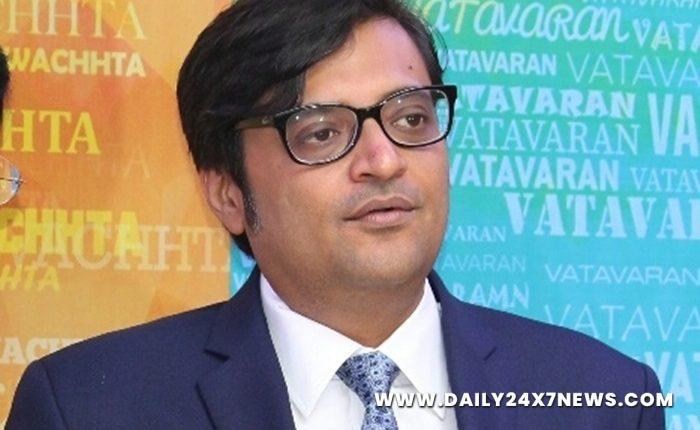 Mumbai : In a lightning strike operation, the Maharashtra Police on Wednesday morning swooped on the home of Republic TV owner and Chief Editor Arnab Goswami in the 2018 double-suicide case of a businessman in Raigad.Around 8 a.m., a team of over a dozen senior police officials from Mumbai and Raigad, several of them armed — led by former ‘encounter specialist’ and now with the elite Crime Intelligence Unit (CIU) Sachin Vaze — descended on his Worli home in Raheja Complex to pick him up.After a lot of hullaballoo for nearly 15 minutes at the flat, the police team managed to take away Arnab, once dragging him by his hair and by his arm, and bundled him into a waiting police van which whisked him off to Raigad, with a camera team from Republic TV trailing.Taken by complete surprise, the Goswamis, including Arnab, his wife Samyabrata, their teenaged son and some others strongly protested, but the police appeared to be in a rough and tough mood.”We had an arrest warrant which we showed him and requested him to cooperate in everybody’s interest,” according to police sources, even as the family continued to argue.At one point, Goswami, who kept protesting stating that his arrest was “illegal” and wanted to speak with his lawyers, was pushed on a sofa near a french window as a couple of other cops stood nearby.His wife started arguing with Vaze and other police officials, but as she seemed to get too close, a couple of women police constable firmly made her sit on a sofa.”The police asked the Republic TV team and their own video team to switch off their cameras… Then he was assaulted and not allowed to take water and medicines,” she claimed.When Goswami Jr. tried to intervene for his father, he too was told to “keep off” as the police went about their job as R-TV team rushed there to capture and telecast the operations live.”He (Goswami) has been arrested in connection with the suicide case of a man and his mother, registered in 2018 (in Raigad).
The same court and the same police have reopened the case,”, Vaze later told mediapersons.The channel strongly slammed the move for “parading the editor of a top Indian news channel like a criminal, pulled by the hair, threatened, not allowed to drink water” after 20-30 policemen barged there.Speaking from the van, Goswami said from behind the grilled window: “They assaulted me… Even my son was assaulted. They did not allow me to meet my father-in-law and mother-in-law.”His shaken colleagues reporting live, made direct emotional appeals to Supreme Court and High Court judges “seeking justice” for what happened right in the middle of Mumbai, in a telecast of the dramatic developments lasting around 15 minutes.Goswami’s arrest came after the Maharashtra Police reopened the case of the double-suicide of an architect Anvay Naik, 53, and his mother Kumud Naik, in her 70s – both directors of Concorde Designs Pvt. Ltd.The mother-son duo was found hanging at their Alibaug bungalow on May 5, 2018, leaving behind a suicide note saying they resorted to the extreme step owing to unpaid dues from three companies, including Goswami’s Republic TV (Rs.83 lakhs), Feroz Shaikh of IcastX/Skimedia (Rs 4 crore), and Niteish Sarda of Smartworks (Rs.55 lakhs).Terming it as a ‘malicious campaign’, the Republic TV later denied all the allegations and said that it had cleared all the dues, after which the case was closed.In May this year, the deceased’s widow Akshata and daughter Adnya complained to the state Home Minister Anil Deshmukh that the Raigad Police had not investigated the case properly, after which it was handed over to the State CID.”Adnya Naik had complained to me that Alibaug Police had not investigated non-payment of dues from Arnab Goswami’s Republic TV which drove her entrepreneur father and grandmom to suicide in May 2018. I’ve ordered a CID re-investigation of the case,” Deshmukh said then.
A few months ago, Akshata Naik made another appeal seeking support to her quest for justice for her late husband, just as there was clamour for justice for the late actor Sushantsingh Rajput who was found hanging in his Bandra flat in June.Today’s police action has evoked mixed reactions from various quarters as the Oxford-educated Goswami has had several brushes with the Shiv Sena-Nationalist Congress Party-Congress alliance Maha Vikas Aghadi (MVA), starting from the April 16 Palghar lynching case of two Sadhus and their driver.In May, the Mumbai Police lodged a case against him for allegedly giving communal overtones to the Bandra migrants gathering for which he was grilled by the NM Joshi Marg Police in June.After Sushantsingh’s death (June 14), Goswami and Republic TV had targeted Chief Minister Uddhav Thackeray, his son and Tourism Minister Aditya Thackeray, Home Minister Deshmukh, Mumbai Police Commissioner Param Bir Singh, besides Bollywood actress Rhea Chakraborty, and others.At times, Goswami referred to them as just “Uddhav”, “Anil Deshmukh”, “Param Bir”, and accused them of dillydallying on the Sushant Singh Rajput probe to shield some influential persons, even as the case was handed over to the CBI, and later the Enforcement Director and Narcotics Control Bureau (NCB) entered the fray.In October, the Mumbai Police unearthed the “TRP Scam” involving Republic TV for which many of its officials were investigated, and a similar case in Uttar Pradesh was taken over by the CBI.

Farmers-govt dialogue inconclusive, 4th round of talks on Thursday