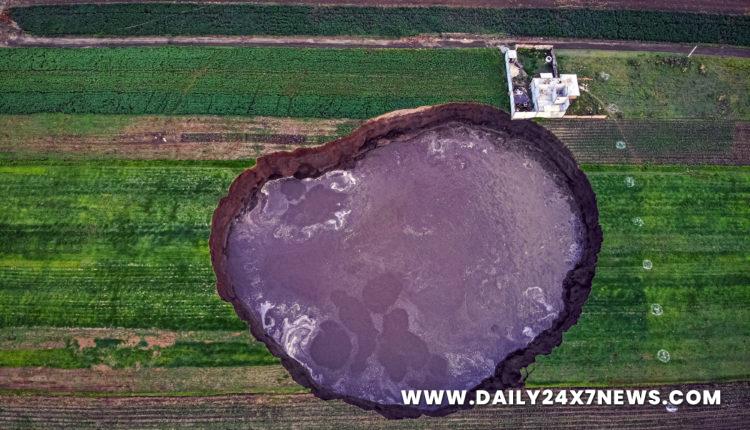 Mexico City : A massive water-filled sinkhole which opened up for unknown reasons in a field in central Mexico is getting bigger, local authorities said.The sinkhole, which was just five metres in diameter when it was first discovered in the village of Santa Maria Zacatepec in the central state of Puebla, is now 97 by 78 metres, the general coordinator of the local civil defence, Jose Antonio Ramirez, said on Thursday.The owner of the only house in the vicinity, which stands directly on the edge of the crater, first discovered it when she heard a loud noise at the weekend.Ramirez said her house was at risk.The causes of the sinkhole were being investigated.Mexico’s national civil defence said underground water flowing in the easily eroded soil may have caused the crater.The estimated depth of the hole is around 20 metres.The Popocatepetl volcano is about 50 km west of Santa Maria Zacatepec. The ground there contains deposits of ash and fine volcanic fragments.According to the US Geological Survey, sinkholes form when groundwater circulates underground, dissolving the rock beneath the surface and creating spaces and caverns underground.Authorities have repeatedly warned the public to stay away from the crater.

SAD (Sanyukat) announces the organizational structure of the party