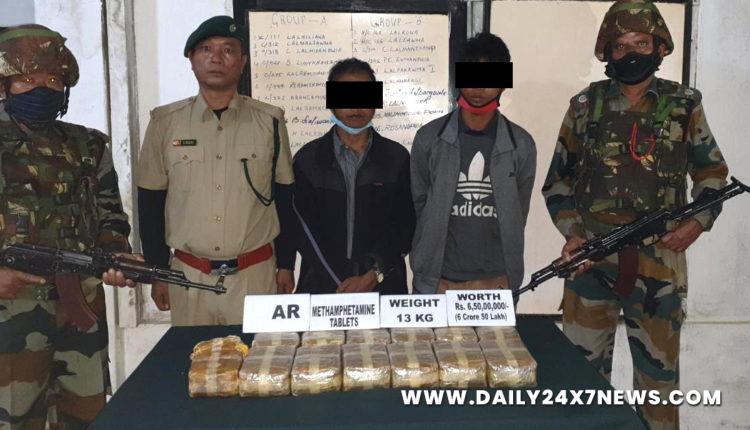 Aizawl : Assam Rifles troopers have arrested two persons and seized a huge cache of drugs valued at Rs 6.50 crore in eastern Mizoram’s Champhai district bordering Myanmar, officials said on Thursday.An Assam Rifles statement said that acting on a tip-off, the troopers of the central paramilitary force arrested two youths from a hut in eastern Mizoram’s Champhai district and seized 1,30,000 Methamphetamine tablets worth Rs 6.50 crore from their possession late Wednesday evening.Officials of the Excise and Narcotics Department in Mizoram accompanied the Assam Rifles troopers during the operation.The two detainees were charged under the Narcotics Drugs and Psychotropic Substances (NDPS) Act.Methamphetamine tablets (also called Yaba tablet or party tablet) contain a mix of methamphetamine and caffeine and are misused as high-dosage drugs in India, Bangladesh and neighbouring countries.Officials said that the drugs were smuggled from Myanmar, which shares 1,643 km of unfenced border with four northeastern states — Mizoram (510 km), Arunachal Pradesh (520 km), Manipur (398 km) and Nagaland (215 km).Smuggling of drugs, arms and other contraband takes place frequently in the northeastern region from across the borders, especially from Myanmar.

Farmers-govt dialogue inconclusive, 4th round of talks on Thursday