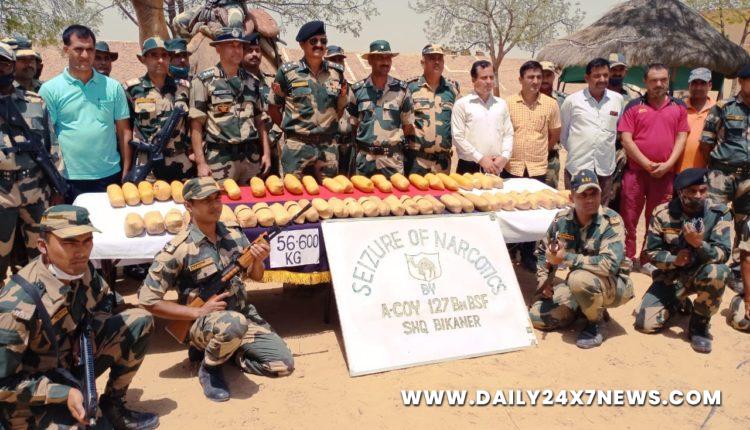 Bikaner (Rajasthan) : The Border Security Force (BSF) has foiled an attempt by Pakistani smugglers to push contraband into India with the seizure of 54 packets of suspected heroin weighing approximately 56 kg — the biggest ever recovery of such a consignment from near the Rajasthan frontier along the International Border (IB).The BSF recovered the huge consignment in the intervening night of Wednesday and Thursday after troops fired, sensing suspicious movements on the border and forcing the smugglers to flee abandoning the contraband.The recovery was made near the India-Pakistan International Border in Rajasthan’s Bikaner.”BSF troops observed some suspicious movement near the wired portion of the border under Chaiky Bandly border outpost. The troops opened fire, but the Pak-based smugglers fled taking advantage of the darkness. During a search, 56.630 kg suspected heroin was seized,” the BSF said in a statement.”This is the biggest such consignment seized ever from Rajasthan frontier area by the BSF.”The BSF, which is mandated to guard the 3,323 km India-Pakistan border, has also registered an FIR in the matter.Officials in the BSF said that the troopers on the spot have also found foot marks of the smugglers.The BSF foiled a similar attempt by Pakistani smugglers on February 7-8 night this year in Sri Ganganagar district along the border. On March 5 and March 20, the BSF foiled similar smuggling attempts and killed two infiltrators separately in both the cases.