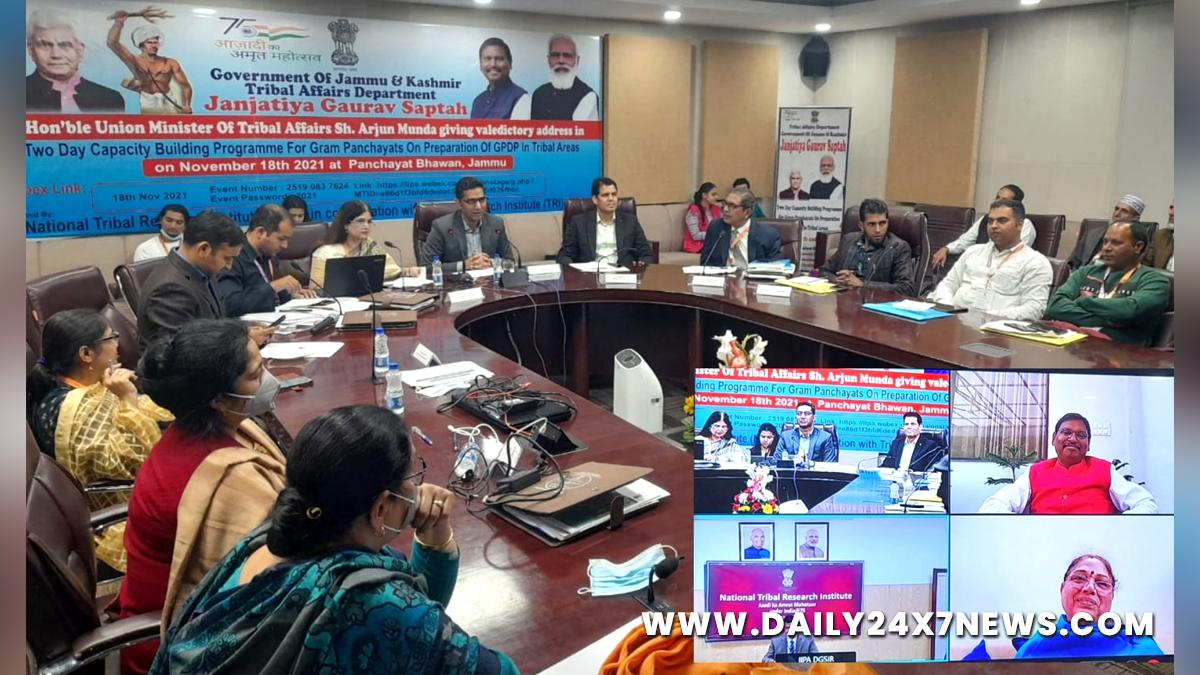 Jammu : Union Minister for Tribal Affairs, Arjun Munda, today chaired valedictory function of two day Capacity Building training programme regarding preparation of Gram Panchayat Development Plan (GPDP) in Tribal areas, held at Panchayat Bhawan, Jammu.Arjun Munda congratulated the participants for successful completion of their training asking them to work in tandem with all the stakeholders so that benefit of various schemes and programs reaches to all panchayats. He said that this capacity building program was organized as a part of Azadi ka Amrit Mahotsav, which is being celebrated to commemorate 75 years of Independence.He said that it is a matter of great pride that we are celebrating the birth anniversary of Bhagwan Birsa Munda as Janjatiya Gaurav Divas and it has been for the first time in the history of India that contribution of tribal freedom fighters has been acknowledged with such honour and pride across length and breadth of the country.Union Minister said that effective implementation of GPDP and other related programs will not only help in empowerment of villages but will take the nation towards new highs of peace, progress and prosperity.“Government of India is focusing on development of tribal communities of the country with special focus on tribal communities of J&K which is a step forward towards materializing Sab Ka Sath, Sab Ka Vikas, Sab ka Vishwas and Sabka Paryas vision of Prime Minister, Narendra Modi”, he maintained.He hoped that this training program has given the tribal people an opportunity to understand their role in development of their areas.

Earlier, Union Minister also interacted with tribal Sarpanchs who participated in the training program and listened to their grievances and demands including development of milk production and processing units for tribal villages, e-classrooms for tribal children, workshops and training for tribal women, training to tribal people for organic farming, agriculture and horticulture, establishment of industries in far flung areas to create employment for tribal people, utilization of tribal funds with active participation of PRIs and others.Meanwhile, a video clip on events organized during the two day orientation program was also presented on the occasion.Secretary Tribal Affairs, Dr. Shahid Iqbal Choudhary, while speaking on the occasion, said that as per the directions of Union Government it has been for the first time that Janjatiya Gourav Divas was celebrated across all districts of J&K. He informed that about 200 panchayats have participated in this 2 day training program saying that these trained Sarpanchs and other representatives will play an active role in effective implementation of various schemes for effective development of their areas.It is pertinent to mention here that this training programme was organized by National Tribal Research Institute in collaboration with Tribal Research Institute J&K. The inaugural address was earlier presented yesterday by R. Jaya, Joint secretary, Union Ministry of Tribal Affairs.During the second day of training session, master trainers threw light on implementation of FRAs in tribal areas, provision of decentralized governance for gram panchayats in tribal areas, GPDP guidelines besides mobilization and utilization of OSR among other topics.Group presentation and feedback sessions were also held during training the program.Among others the training programme was attended by Dr. Nupur Tiwary, Special Director, National Tribal Research Institute IIPA, New Delhi, M.A Mirza, Director Tribal Affairs, J&K, Dr. Bala Prasad, Special Secretary (retired), Union Ministry of Panchayat Raj and OSDs Mission Youth, J&K.

Team India needs to figure out which spinners will…

I can never say no to Subhash Ghai : Sonu Nigam