Terms Kashmir as treasure trove of herbs with vast opportunities 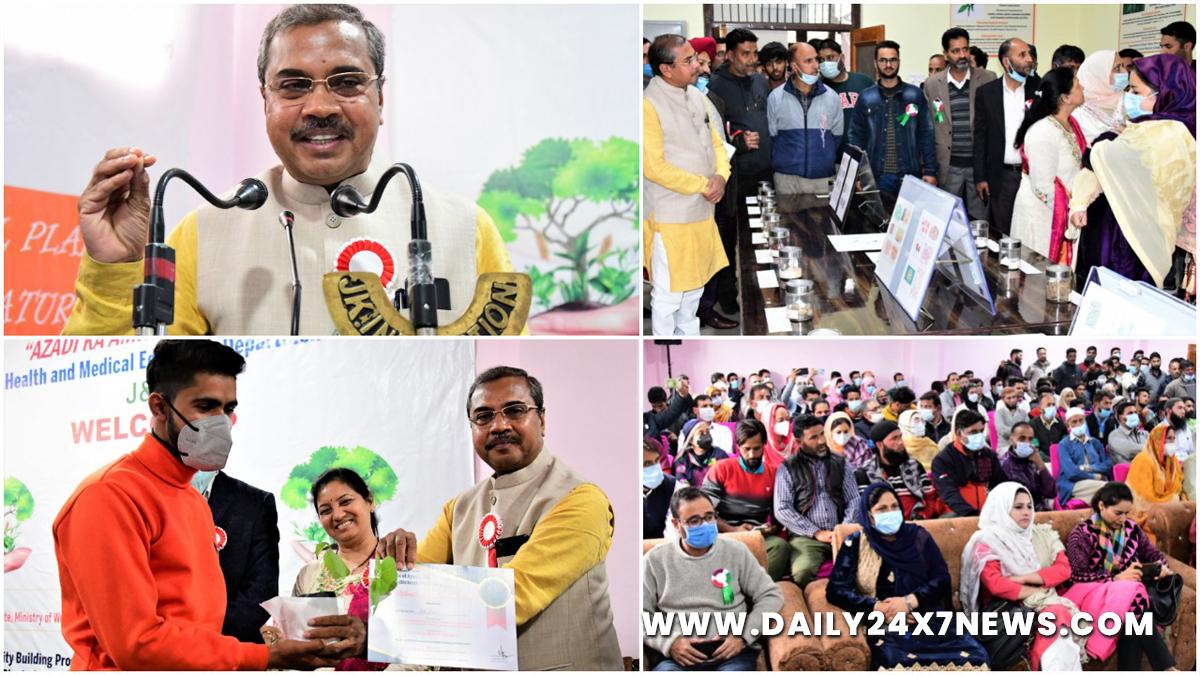 Ganderbal : As part of the Union Government’s public outreach programme, Union Minister of State for Ayush, Women and Child Development, Dr. Munjapara Mahendrabhai today visited Government Unani Medical College and Hospital (GUMC&H) Nawabagh Ganderbal.During his visit, the Minister presided over One–Day Capacity Building Program for potential Farmers/Growers of Medicinal Plants for promotion and cultivation of Medicinal Plants under AYUSH “AAP Ke –DWAR” initiative to Celebrate AZADI KA AMRIT MAHATSOV at Govt. Unani Medical College and Hospital Nawabagh Ganderbal. The function was organized by the Directorate of Ayush, J&K and State Medicinal Plants Board.Speaking on occasion, the Union MoS highlighted the importance of Medicinal Herbs used in the country for promotion of health and prevention of diseases. He called Kashmir a treasure trove of herbs with vast opportunities. He stressed for dissemination of training on latest agro-techniques of some high Commercial Value Medicinal Plants to potential farmers /growers of Kashmir.Complementing the farmers/growers who attended the Capacity Building Program, the Minister said that the Union government is focused to double the income of farmers by ending December 2022 and in this regard various schemes have been launched for the benefit of farmers.

He said that the ministry of AYUSH is focused to strengthen the institutions of AYUSH at grass root level.Director Ayush J&K, Dr. Mohan Singh in his address stressed on the need to promote health through Medicinal plants. He also thanked Ministry of Ayush for its support in establishing the first ever Unani Medical College in the UT after a gap of fifty years.Dr. Sheikh Bilal, Regional Director, RCFC, North also highlighted the role of potential farmers/growers in making J&K a hub of Medicinal and aromatic plants in future.Earlier, Dr. Munjpara Mahendrabhai took round of OPD block, Operation Theatre Block, various labs inside the Hospital and all blocks of the academic building especially Pharmacology, Anatomy and Physiology labs. He interacted with the students of 1st Batch of BUMS as well and stressed on providing best Ayush Medical Education to prepare them as competent doctors of the future.The Union MoS informed that the project has been completed at an estimated cost of Rs 32.50 crore by J&K Housing Board. The health care facilities are available in the Hospital and will be augmented further to make this Hospital fully functional in near future, he added.Later, the Minister felicitated the potential farmers/growers and handed over quality plant material and seeds to them for creating more economic avenues and revenue generation through Medicinal plant industry in the Union Territory of J&K.

International Day of Persons with Disabilities