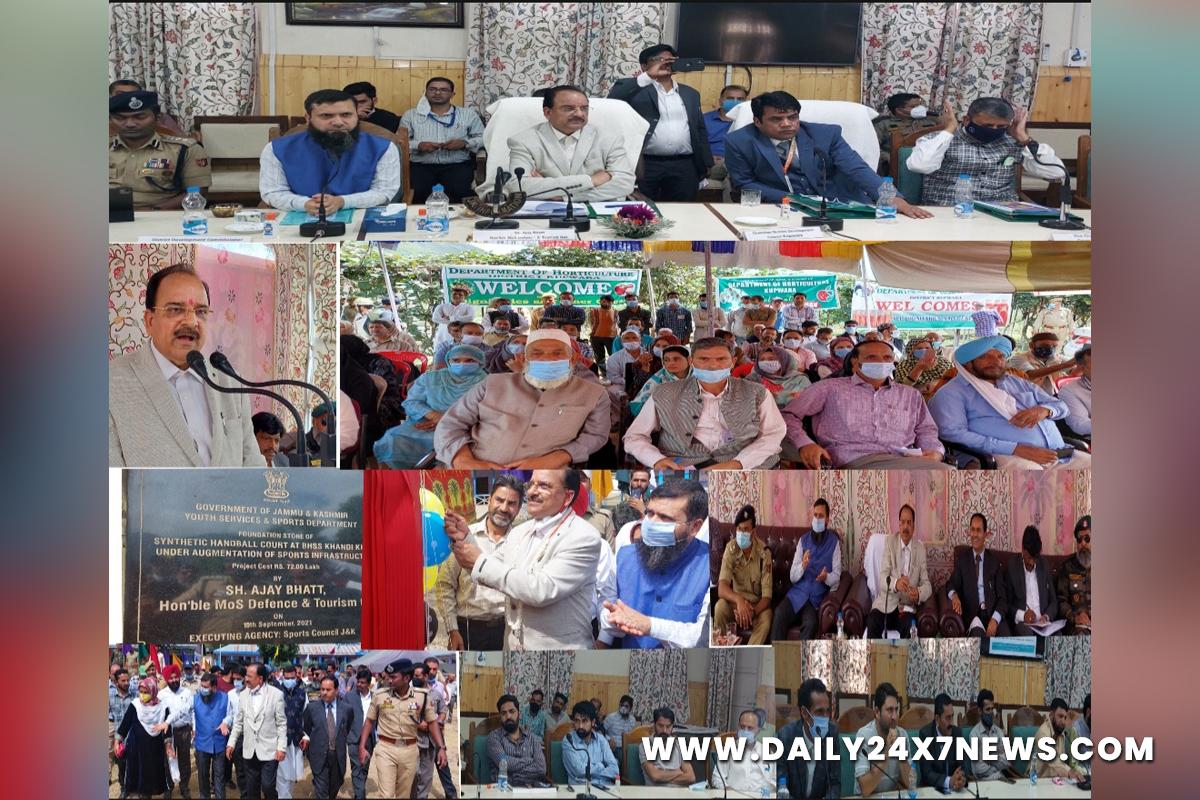 Srinagar : As part of Union Government’s public outreach programme for Jammu and Kashmir, Union Minister of State for Defence and Tourism, Ajay Bhatt visited border district of Kupwara of North Kashmir today. During the tour, the Minister visited forward post near the Line of Control (LOC) and reviewed the security scenario in the area. He also interacted with Army officers and troops. Later, the Minister visited Horticulture Base Station Chogul expanded over 184 Kanals of land. He inspected the Horticulture Department stall and saw variety of products including fruits, walnut, organic honey. Shri Bhatt also visited seedling nurseries of different fruit species and interacted with progressive orchardists and farmers besides women Self Help Groups and local PRIs.Addressing the gathering, the Union Minister of State, Shri Ajay Bhatt expressed his happiness for being among the people of the frontier district of Kupwara. He said that the great etiquettes of Sufi Saints are still alive in Kashmir, as reflected by the warmth of the people during his visit. Terming Kashmir as a paradise on earth, he said that the Government headed by Prime Minister Narendra Modi is making all out efforts to keep its essence intact by providing overall development of the area, especially border district Kupwara.

All the requests, issues and grievances projected by PRIs, Self Help Groups and the public have been taken note of and the same would be put up with Government at Union level as well as with Lieutenant Governor for redressal, Shri Bhatt added.The people are marching forward and development activities are going in a big way. He assured that border tourism, eco-tourism and Horticulture tourism will be taken up on priority.The Minister laid foundation stone of a Synthetic Handball Court at Boys Higher Secondary School, Kandi Khas at a cost of Rs.72 lakh and interacted with members of Youth Club and local PRIs.While enlisting the Centrally Sponsored Schemes, Shri Bhatt urged the need for better utilization of the benefits of these schemes by all stakeholders. He impressed upon the youth to channelize their talent in the prospective way and earn laurels for themselves and the nation. The Government of India is always for the encouragement of the youth of Kashmir for their better future.The Deputy Commissioner Kupwara, Shri Imam Din; Director Tourism Shri GN Itoo and other officials were present on the occasion.During the visit, PRI members as well as public representatives submitted charter of demands to the Minister, which include development of border tourism and general developmental issues of the district. During a meeting with officers of the district administration, Deputy Commissioner, Kupwara, briefed the Minister about the development profile and the major achievements of the district.