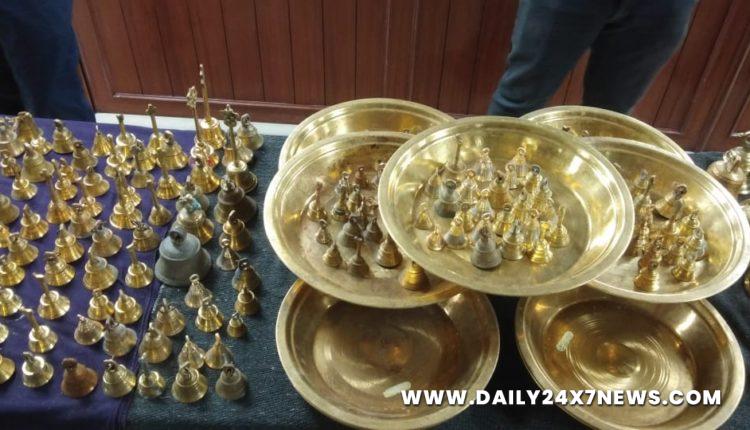 Visakhapatnam : City police arrested eight people for stealing brass item offerings to the deity of Simhachalam Devasthanam.Police arrested Kundi Suresh, 30, Kasi Mahesh, 24, Somala Srinivas, 32, Soma Sateesh, 22, Pindrala Apparao, 40, Vadde Ramu, 35, Madem Rajasekhar Reddy, 28, Avula Venkata Kumar Reddy, 41.”Simhachalam temple regularly receives small brass items from devotees as offerings, which are subsequently auctioned,” Visakhapatnam Police Commissioner Manish Kumar Sinha told IANS.In the month of August, the temple auctioned 665 kg brass items, which the buyer stuffed into gunny sacks and kept them in a kalyana mandampam near the temple.On noticing the brass items being stored in the kalyana mandapa, the first four accused, Suresh, Mahesh, Srinivas and Sateesh, who work in the temple as sweepers stole them, one bag at a time, over some days.”Ultimately, when the person who bought the brass items came to take away his brass bags, there was a problem and it was reported to us,” said Sinha.Puli Rama Rao, 58, assistant executive officer of the temple lodged a complaint about the theft of 550 kg brass items saved in 34 bags, valued at Rs 1.2 lakh.Based on the complaint given by Rao, police registered a case under IPC Section 380 at Gopalapatnam police station. We arrested the accused on Tuesday, produced them in a court on Wednesday, who are currently in judicial custody, an officer said.Police managed to recover all the stolen items, four bags of brass items, weighing 77 kg and 28 brass ingots weighing 473 kg. The stolen brass items included bells, basins and ingots.

Dr. Harsh Vardhan conveys Prime Minister’s clarion call of building a Jan-Andolan against COVID to all the members of Indian Red Cross Society