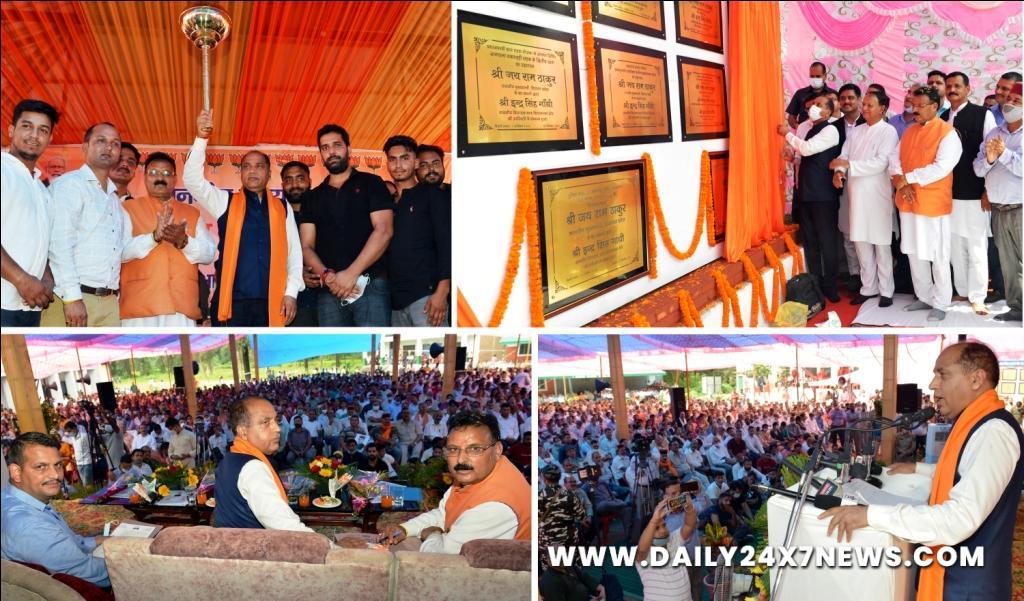 Mandi : Chief Minister Jai Ram Thakur today inaugurated and laid foundation stones of developmental projects worth Rs 172.10 crore at Gagal in Balh Vidhan Sabha area of Mandi district.While addressing a largely attended meeting at Gagal, the Chief Minister announced opening of HPSEB Division at Ner Chowk, Atal Adarsh Vidyalaya in Balh constituency, upgradation of PHC Gagal to CHC, opening of veterinary dispensaries in Seoli and Sakroha gram panchayats, upgradation of Health Sub Centre Rajgarh to PHC, starting of science classes in Government Senior Secondary School, Bhangrotu, renaming of Government Senior Secondary School, Gasanu as Shaheed Naik Pushpraj Government Senior Secondary School, Gasanu as a mark of respect to the martyr.Jai Ram Thakur announced Rs. 10 lakh each for construction of Panchayat Bhawans in 14 newly created gram panchayats in Balh constituency and Rs. 10 lakh for construction of stadium/ground at Government Senior Secondary School Pauri. He said that matter regarding setting up of NCC Academy in Balh would also be taken up with the appropriate authority. He announced Rs. 10,000 from his discretionary fund to each Mahila Mandal who participated in the todays function. He said that matter regarding double laning of Behna road would also be taken up under CRF.Chief Minister said that the State Government has always given special focus on development of Balh area. He said that during his one-day tour to the area he would be dedicating and laying foundation stones of developmental projects worth Rs 291.04 crore in Balh Vidhan Sabha area. He said that it was during the tenure of the BJP Government in the State, when the decision of setting up a Medical College was taken in Balh area as it was the second biggest district of the State after Kangra. Jai Ram Thakur said that OLS survey has been completed for international airport at Balh and Lidar survey would be completed soon. This would pave a way for a world class airport in the State. He said that even the 15th Finance Commission has also recommended Rs. 1000 crore for construction on this airport.

He also performed bhumi pujan of Rs. 2.17 crore PHC building and Rs. 3.52 crore Tanda-Kohla-Tikkari-Kawalkot-Sidhkothi road.Several social, cultural, religious and political organizations honoured the Chief Minister on the occasion. Chief Minister was accorded rousing welcome on his arrival at Dhangu helipad and en route upto Gagal in Balh vidhan sabha area by the people. Jal Shakti Minister Mahender Singh Thakur said that the State Government under the able leadership of Chief Minister Jai Ram Thakur has ensured equitable and balanced development of the State. He said that a NDRF Battalion was also being established in Balh Vidhan Sabha area and credit of this also goes to the Chief Minister. He also gave credit of establishing Medical College and Medical University in Balh Vidhan Sabha area to the BJP Government. He said that Rs. 86 crore sewerage scheme has also been sanctioned for Ner Chowk. He congratulated the people of the State that the Chief Minister has been adjudged the best Chief Minister of the Country in a survey conducted by an independent agency. MLA Inder Singh Gandhi detailed out various developmental demands of the area. He said that several developmental projects were going on in the constituency and credit of this goes to the Chief Minister Jai Ram Thakur who has accelerated the pace of development in the constituency. He thanked the Chief Minister for creating 14 new panchayats in his constituency. Mandal BJP President Hem Pal Rana thanked the Chief Minister for dedicating several developmental projects for the area.MLAs Col. Inder Singh, Vinod Kumar and Jawahar Thakur, Chairman MILKFED Nihal Chand Sharma, Chairman Zila Parishad Pal Verma, Chairman Wafq Board Rajbali, Deputy Commissioner Arindam Chaudhary, Superintendent of Police Shalini Agnihotri, Chief Engineer PWD Ajay Gupta were present on the occasion among others.

Channi’s ordeal is post-matric scam, whether Dharamsot is put in jail or is given minister’s chair