Arvind Kejriwal gives 7 guarantees to traders and businessmen in Amritsar

Channi government not doing anything at grassroots level, because its intentions and policies are not clear : Arvind Kejriwal 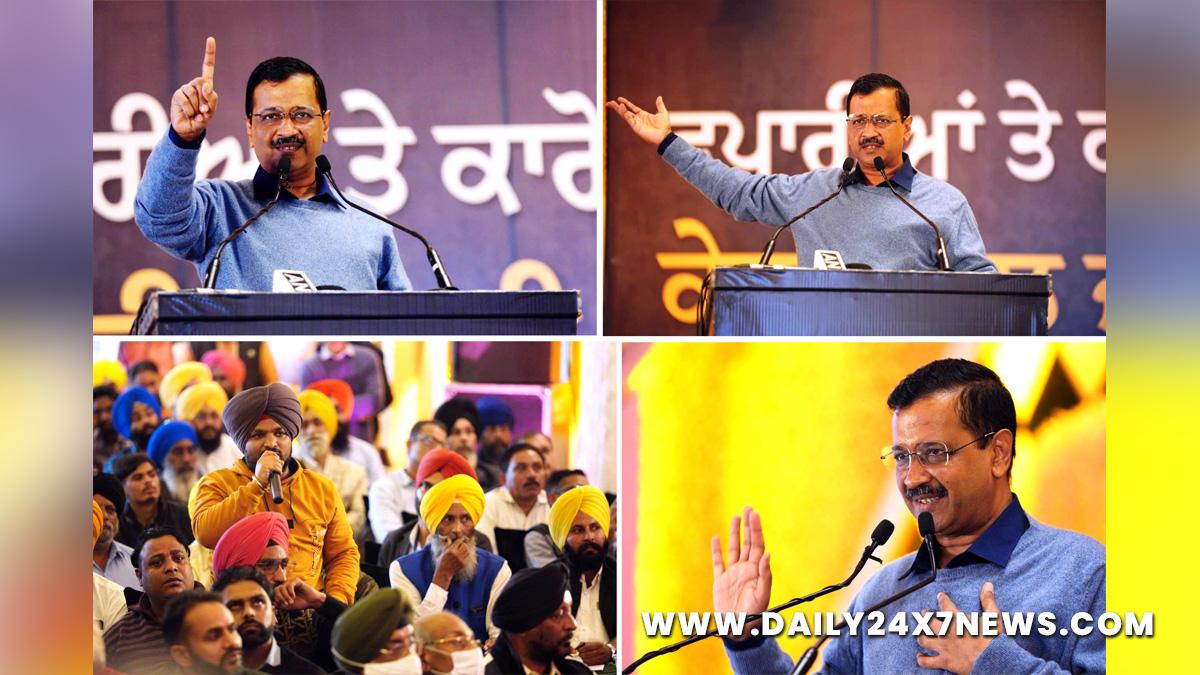 Amritsar : The Aam Aadmi Party (AAP) National Convener and Delhi Chief Minister Arvind Kejriwal, who was on a two-day Punjab visit under ‘Mission Punjab’, called upon the traders, businessmen and industrialists to bring a business revolution in ‘Guru ki Nagri’ Amritsar and also announced 7 guarantees for trade, commerce and industrial development on Tuesday. These guarantees include setting up of a commission, abolishing ‘inspector raj’, fixing VAT refunds, ensuring power supply, setting up of Punjab Bazaar portal, improving law and order and construction and development of focal points.Kejriwal said, “Punjab’s land has the great potential to revolutionize. But due to wrong policies of the Congress and the Akali Dal, youth are going abroad. Therefore every trader, entrepreneur, farmer, laborer, woman and student of Punjab must press the ‘broom’ button once to bring revolution in the state.” On the occasion, Punjab Affairs in-charge Jarnail Sing, co-in-charge Raghav Chadha, MLA Aman Arora and senior leader Kunwar Vijay Partap Singh were present.Kejriwal held a meeting with traders, businessmen and industrialists as part of AAP’s ‘Kejriwal di Galbaat’ program in Amritsar and shared strategies after listening to their problems and needs.

After seeking the views of traders, businessmen and industrialists, Arvind Kejriwal in his address said, “Whatever announcements or guarantees Kejriwal makes during his visit to Punjab, Chief Minister Channi pretends to fulfill them and releases advertisements in the newspapers. But at the grassroots level, the Channi government is not doing anything because its intentions and policies are not clear.”Kejriwal said that during the last visit, when he announced to make the traders and businessmen as partners, on the very next day Channi had advertised in the newspapers and invited the businessmen to become partners, but the reality is that despite the announcement by Chief Minister Channi to withdraw 40,000 VAT notices; these notices have not been canceled.Expressing his business mission, Arvind Kejriwal gave seven guarantees to the traders, businessmen and industrialists of Amritsar, which would be implemented immediately after the formation of the Aam Aadmi Party government. First, Kejriwal guaranteed to set up a commission in Punjab. According to him, “The commission will have only traders and businessmen as its members, who will make decisions and formulate policies. Government officials and political leaders will not join the commission.”Second, he guaranteed to end the ‘inspector raj’, stating that the atmosphere of fear in the business sector would be eradicated and weekly collection and ‘goonda’ taxes would be stopped.

Giving the third guarantee on VAT refund, Kejriwal said that the issue of VAT refund would be resolved within six months after the formation of the AAP government in Punjab.Emphasizing the importance of electricity for industries and businesses, the AAP supremo gave the fourth guarantee of power reforms. He said that relief from power cuts would be provided and power supply would be maintained 24 hours and 7 days. He said that even in Delhi the condition of power was very bad but when the AAP government came; the power infrastructure was improved and proper and cheap power was provided.Announcing the fifth guarantee for the creation of ‘Punjab Bazaar Portal’, Arvind Kejriwal said that through this portal every trader would be able to sell their goods online. At the same time, Kejriwal gave the sixth guarantee to maintain proper law and order for businessmen in Punjab. He said that businessmen like peace; and trade and industry thrive in a peaceful environment. Therefore, separate security arrangements will be made for traders.Regarding the focal points, Kejriwal gave the seventh guarantee to traders and businessmen. He said that new focal points for industries and businesses would be set up in Punjab and facilities would be provided in the old points.

Soha Ali Khan joins the ‘Chhorii’ universe with its sequel