Workers of Bhartiya Railway Mall Godam in Haryana will also be registered on the the e-shram portal : Manohar Lal Khattar 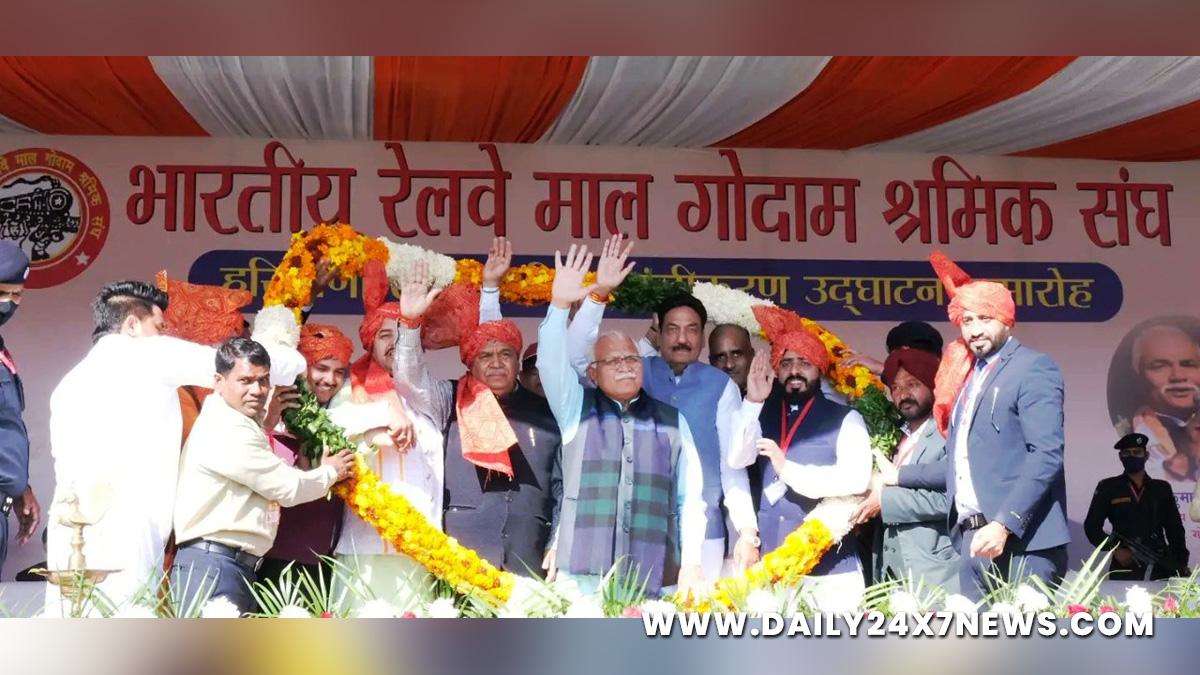 Chandigarh : Haryana Chief Minister, Manohar Lal said that efforts are being made to double the income of farmers as well as workers in the state. For this, the registration of unorganized workers is going on in Haryana, from today the registration of workers of Bhartiya Railway Mall Godam working in Haryana will also be started. After this, they will also be able to get the benefit of schemes related to the central and state government, informed Sh. Manohar Lal.The Chief Minister said this while addressing the Haryana State Labour Registration Inaugural Ceremony organized by the Bhartiya Railway Mall Godam Shramik Sangh in Panchkula today. Haryana Vidhan Sabha Speaker, Sh. Gian Chand Gupta and Power Minister, Sh. Ranjit Singh also remained present.The Chief Minister said that the workers are the real builders of society. The hard work of every workers is involved in the creation of this world. When the Industrial Revolution came in the 19th century, railways played an important role in the development of industries. The progress of the country depends upon the progress of industries, the progress of the industries depends upon the progress of railways and the progress of railways depends upon hardwork of workers. The progress of the country depends on the workers.

Manohar Lal said that under the leadership of Prime Minister, Sh. Narendra Modi, all sections of the society are being taken care of, but his special focus is on the upliftment of the workers and poor. He said that workers have the first right on government resources. Haryana government is registering construction workers, migrant labourers, shopkeepers, fishermen and all other unorganized workers. On completion of their registration, 22 schemes like health, children’s education, employment, house and social security pension are being implemented for them.Expressed gratitude to PM for starting Shramev Jayate scheme. The Chief Minister thanked the Prime Minister for launching Shramev Jayate scheme. He said that a workers is a person who does extreme hard work with honesty. For the upliftment of the poor, Mukhyamantri Antyodaya Parivar Utthan Yojana has been started. So far, data of 3.5 lakh families have been received, whose income is less than Rs 1 lakh. Antyodaya Gramodaya Melas are being organized to reach out to such families so as to provide the benefits of more than 40 schemes of 18 departments of the government. In these Melas, work is being done to get loans from banks for self-employment and private jobs according to their qualifications. Other provinces are also studying this scheme now.

Government dedicatedly working towards improving gender ratio
The Chief Minister said that Haryana Government is continuously working for the Beti Bachao-Beti Padhao campaign. There has been a significant improvement in the gender ratio of girls in Haryana. Earlier there were 853 girls per 1000 boys but now there are 913 girls. The Chief Minister said that the government’s goal is to take this figure to 950.
Suggestions related to the interests of workers will be implemented
Chief Minister said that the state government is working keeping in mind the interests of the workers. In future, if any person or representatives related to workers give suggestions, then they will also be implemented.
Workers played an important contribution in the COVID period
Haryana Vidhan Sabha Speaker, Sh. Gian Chand Gupta said that the State Government is working with the spirit of Antyodaya. The country cannot progress till the workers and poor people are economically uplifted. During the COVID-19 period, the workers did not allow the supply of food and other essential things to decrease in the trains.On the occasion, Power Minister, Sh. Ranjit Singh said that workers of Mall Godam have always done hard work. These workers have an important contribution towards the development of the nation.

Special events and activities every weekend at the Sheikh Zayed Festival