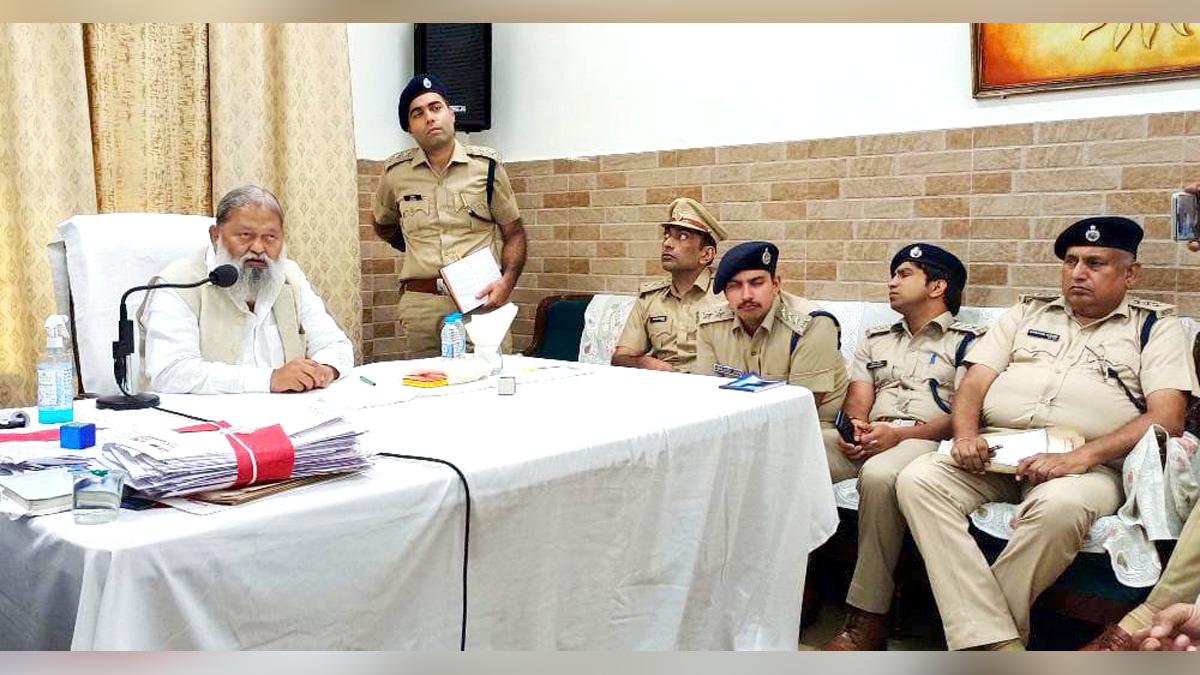 Rohtak : Haryana Home and Health Minister, Anil Vij, while redressing the grievances of the people of the state, directions to the police officers for suspension a Havildar of Rohtak and to form the SIT in more than seven different cases for investigation. Apart from this, he also directed the transfer of SHOs of two police stations who were lax in the investigation.

Vij was redressing the greivances of the people of the state in the Janata Darbar held at PWD Rest House in Ambala Cantonment today. In the hope of justice, more than five thousand complainants gave their complaints to Home Minister Anil Vij, on which he gave instructions to the officers for action.While redressing to the complaint of a complainant, he said that ‘if any officer does not take action, then he himself can go there and take action’.

*Havildar suspended, complaint against SHO in Sirsa, dirctions for the transfer and SIT formed*
In the Janata Darbar, the complainant from Rohtak accused the Havildar of assault and the police did not take any action on his complaint. Taking strict cognizance of the matter, Minister directed to suspend the Havildar with immediate effect and investigate the matter.

At the same time, a woman from Sirsa told that her girl was molested and the accused involved in the case, after coming out on bail, severely assaulted her son, due to which he died. No proper action is being taken by the police in the matter.

Taking cognizance of the woman’s complaint, the Home Minister directed to conduct an investigation by forming an SIT and while giving instructions to provide security to the said woman, he directed to transfer the SHO of Chopta police station.

*Case registered against the complainant, Vij directed to constituted SIT and transfer the SHO*
During the Janata Darbar, an elderly woman who came from Nikdu village in Karnal district told that the crops standing in her fields have been burnt by some miscreants and along with this she and her family members have also been beaten up.

Despite giving a complaint to the police, no action is being taken, on the contrary, a case has been registered against them. The Home Minister ordered the immediate transfer of the SHO of Nikdu police station. Along with this, by forming an SIT, direction were given to investigate the matter from another district.

*SIT constituted in these other cases*
Retired BSF personnel, who came from Rohtak, while complaining to the Home Minister, told that a case of assault has been registered against him, but the opposition party along with the police has also registered a case of misconduct against him. Minister has directed that constitute a separate district SIT from Rohtak and investigate in the matter.

Similarly, while giving a complaint against the husband, a Rohtak resident woman alleged that the police was being lax in the investigation of the case and the accused were not being arrested. Vij directed to constitute a three-member SIT in the matter. Women officers were also asked to be included in the committee.

The complainant, who came from Yamunanagar, told that the police did not take concrete action in the assault case and his FIR was also not being registered. In the matter, Minister directed the ADGP of Ambala range to constitute a three-member committee and also to investigate the role of police.

The complainant, who came from Ismailabad in Kurukshetra, told Minister that he runs a dhaba on the highway and a few days ago people from Tarn Taran in Punjab ate food at the dhaba and did not pay the bill of thousands. In this case, no action was taken on complaining to the police. The Home Minister directed to constitute an SIT in the matter.

Home Minister Vij gave instructions to take action on various complaints and reprimanded many other officers. In the Janata Darbar, Anil vij gave the directions for action on several others complaints.

After the assurance of Home Minister Anil Vij, Kisan Union will not block GT Road on…