BJP government committed to the welfare of all sections of society : Jai Ram Thakur 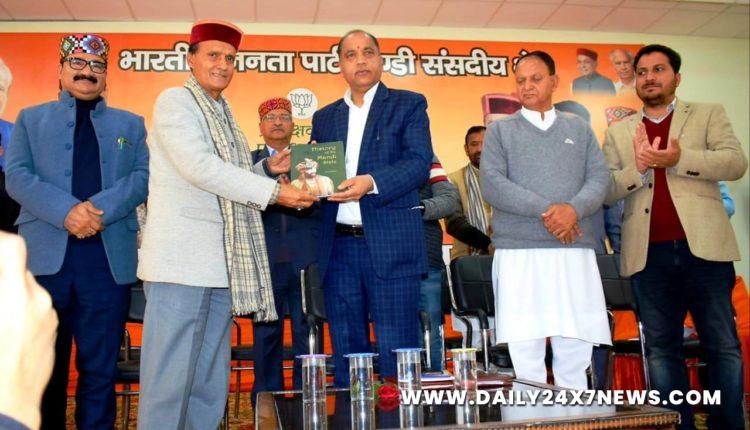 Mandi : The BJP Government in the State ensured that pace of development goes uninterrupted even during the Covid-19 pandemic by making optimum use of information technology to perform inaugurations and foundation stones of developmental projects worth about Rs. 3500 crore. This was stated by Chief Minister Jai Ram Thakur while presiding over the meeting of BJP workers of Mandi Parliamentary constituency at Mandi today.Chief Minister said that the party also played significant role during this period by providing all possible assistance to the people of the State. He said that lakhs of people provided food kits, sanitizers and masks to the needy. He said that the people also generously contributed towards the Chief Minister Covid Fund and PM CAREs.Jai Ram Thakur urged the party workers to ensure that BJP government again comes to power in 2022 Assembly Elections. He said that BJP government was committed for welfare of every section of society and could boast of one of the best leader of the world. He said that Congress on the other hand was a party of the particular family, which neither had a vision nor commitment to serve the nation with dedication.Chief Minister said that the people of the State were fortunate to have the benevolence of Prime Minister Narendra Modi who considers Himachal Pradesh his second home. He said that the NDA Government under the able leadership of Prime Minister Narendra Modi took several historic decisions such as abrogation of Article 370 thereby making Jammu and Kashmir integral part of India.
He said that abolition of Triple Talaaq and bringing in of CCA were yet other historic decisions which were possible due to the able leadership provided by the Prime Minister Narendra Modi.Jai Ram Thakur said that today BJP has emerged as the biggest party of the world and credit of this goes to each and every party worker. He said that it was a matter of pride for every Himachali that today BJP at National level was led by son of the soil Jagat Prakash Nadda. He said that this has entrusted big responsibility on people of Himachal Pradesh to strengthen the BJP at the State level also.Chief Minister said that the BJP Government in the State has got massive support from the people of the State. He said that the BJP Party has not only won all the four seats in Parliamentary elections but has created a record by winning in all the 68 Vidhan Sabha areas. He said that the vote share of the BJP was maximum in the country. He said that the BJP also won both the assembly by- elections and thereafter in PRIs and ULBs elections.Jai Ram Thakur urged the party workers to effectively disseminate the policies and programmes of the State Government upto the grass root level. He also urged the workers to have close liaison with the beneficiaries of various schemes and programmes of the State Government.Jal Shakti Minister Mahender Singh Thakur, Education Minister Govind Thakur, MP Ram Swaroop Sharma and BJP MLAs of Mandi and Kullu and former Minister Gulab Singh, Former MP Maheshwar Singh, Zila Parishad Chairman Pal Verma, Mandi Mahila Morcha President Suman Thakur and other BJP office bearers were also present on the occasion.